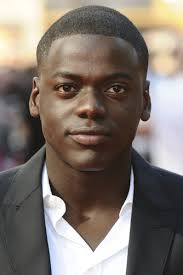 Daniel Kaluuya (born 8 May 1989) is a British actor, comedian and writer, who is known for playing Posh Kenneth in the E4 teen-drama Skins, Bing in the Black Mirror episode “Fifteen Million Merits and W’Kabi in the 2018 Marvel movie, Black Panther”. He has also appeared as Tealeaf in the BBC dark comedy series Psychoville and Mac in the BBC Three’s horror drama The Fades. Kaluuya appeared as Agent Tucker in the 2011 film Johnny English Reborn, alongside Rowan Atkinson, and in 2013, he appeared in the film Kick-Ass 2. He also had a starring role in 2017 film Get Out.

Kaluuya then joined the original cast of Skins as Posh Kenneth and was a contributor on the first two series, as well as being a staff writer, and the head writer of the second series episode “Jal” and third series episode “Thomas”. He also presented the Skins Podcast (also called Skinscast).

After Skins Kaluuya appeared as a guest star in many established series such as Silent Witness, the Doctor Who special Planet of the Dead and Lewis. He has also appeared in the sketch show That Mitchell and Webb Look twice and the sketch show Harry and Paul. Kaluuya also voiced a character in the BBC Radio 4 sitcom Sneakiepeeks.

In 2009, he became a regular cast member in the ITV comedy FM as amateur DJ–Radio Runner “Ades” and also as Michael “Tea Leaf” Fry in dark BBC comedy Psychoville.

At the end of 2009, the Screen International Magazine picked Kaluuya out in their annual report as a ‘UK Star of Tomorrow’. Daniel has certainly lived up to that title, following his lead role in ‘Get Out’ with a standout performance in Ryan Coogler’s ‘Black Panther’ and is set for even greater stardom with Shaka King & Ryan Coogler’s ‘Judas and the Black Messiah’, due to hit the big screen next year.

In 2010, Kaluuya played the lead role in Roy Williams’ Sucker Punch at the Royal Court Theatre in London. Kaluuya lost 3 stone for the role, becoming a healthy weight, having previously been extremely overweight, and both the play and Kaluuya won rave reviews and he won both the Evening Standard Award and Critics’ Circle Theatre Award for Outstanding Newcomer.

In 2011, Kaluuya was leading man in Daniel Mulloy’s Baby, which went on to win the Best Short Film Award at the Edinburgh International Film Festival as well as the Best Short Film Award at the British Independent Film Awards. In 2011 Enda Walsh’s adaption of his stage play Chatroom was also released with Kaluuya having a main role. He later appeared in the sequel of Johnny English, Johnny English Reborn, as Agent Tucker. He also played the role of Mac Armstrong in BBC3’s supernatural drama The Fades (TV series).

Kaluuya played one of the lead characters ‘Bing’ in “Fifteen Million Merits”, an episode of the anthology series Black Mirror. In September 2015, Kaluuya portrayed FBI agent Reggie Wayne, in Sicario.

In December 2016, Kaluuya was cast in the Marvel Studios movie Black Panther. Released in 2018, the movie went on to become one of the top-grossing movies of the year and in the Marvel franchise.

“You can kill a freedom fighter but you can’t kill freedom,” declares Daniel Kaluuya echoing the words of Fred Hampton, in the dramatic trailer for a new film about the life of the Black Panther leader.

In the movie plays Fred, an enigmatic activist and organiser, who was killed in a co-ordinated raid by the FBI and Chicago Police in 1969.

Starring opposite him in the movie is Lakeith Stanfield as William O’Neal, the FBI informant who infiltrated the Black Panthers and provided information that led to Hampton’s death.

Called Judas and the Black Messiah, the movie is due for release in early 2021 – into a world that will have changed irrevocably since filming began in Ohio last September, following the worldwide movement against the continued brutalisation and murder of melanated people that began in the light of the summary police execution of George Floyd in May 2020.