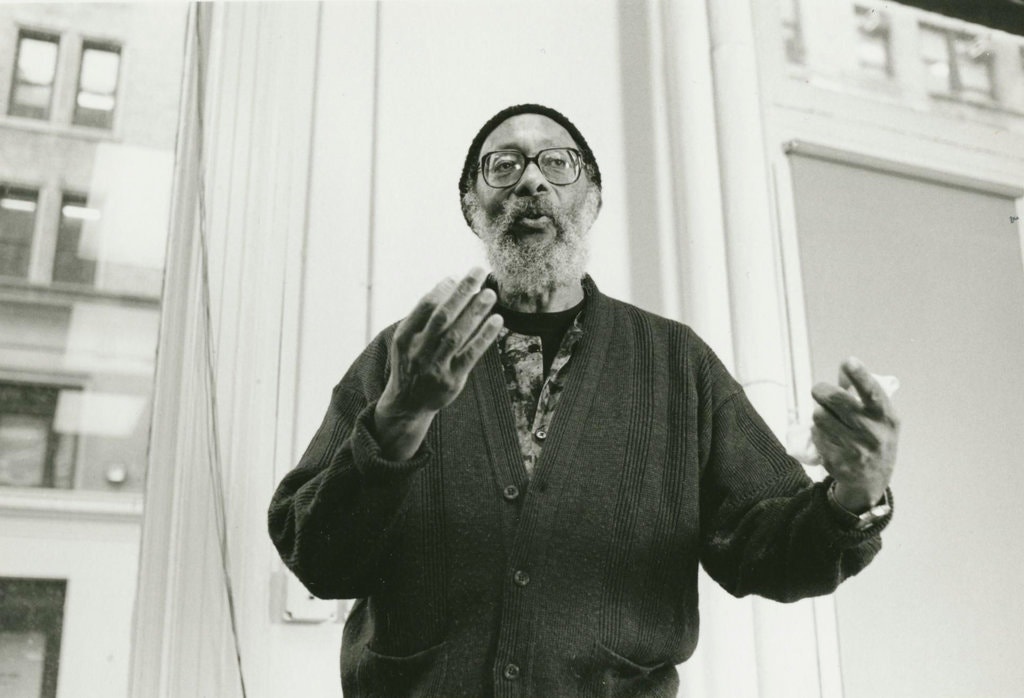 Lawson Edward Brathwaite was born on May 11, 1930, in Bridgetown, Barbados, to Hilton and Beryl (Gill) Brathwaite.

His father was a warehouse clerk. He took the name Edward Kamau Brathwaite in the 1970s as a way to embrace all of his heritage; the grandmother (or, in some tellings, the mother) of a Kenyan writer who was a close friend is said to have suggested “Kamau” while Dr. Brathwaite was on a fellowship at the University of Nairobi.

Dr. Brathwaite was educated at Harrison College in Barbados, where by 1950 he was publishing work in the literary magazine Bim. He earned a scholarship that enabled him to study at Cambridge University in England, where he received a bachelor’s degree in 1953 and a diploma of education in 1954.

He took a job as a school inspector in Ghana just as that African country was moving toward independence; he credited his travels to villages in that country with broadening his thinking about history, culture and ways of perceiving the world.

He and his first wife, Doris Welcome, whom he married in 1960, started a children’s theater in Ghana before he returned to the Caribbean in 1962 to teach at the University of the West Indies. In 1968 he earned a Ph.D. at the University of Sussex in England with a thesis on the development of Creole society in Jamaica.

He also published his first three poetry collections about that time; in 1973 they were gathered into a single volume, “The Arrivants: A New World Trilogy.” Other poetry volumes included “Middle Passages” (1992) and “Ancestors” (2001).

While teaching at the University of the West Indies, he directed the Institute of Caribbean Studies. In 1992 he joined the faculty of New York University, teaching comparative literature.

Dr. Brathwaite’s first wife died of cancer in 1986. In 1998 he married Beverly Reid, who survives him along with a sister, Joan; a son from his first marriage, Michael; and a granddaughter.

The themes of music and cultural history that permeated his poetry are brought together in “The Making of the Drum,” which begins with the killing of a goat so its skin can be used for the instrument:

Bless you, four-footed animal, who eats rope, skilled upon rocks, horned with our sin; stretch your skin, stretch it tight on our hope; we have killed you to make a thin voice that will reach further than hope further than heaven

Kamau Brathwaite, whose lyrical poetry wove together the history and imagery of his native Barbados, the Caribbean and the African diaspora, as well as his personal experiences, died on Feb. 4 at his home in Barbados. He was 89.

Mia Amor Mottley, the prime minister of Barbados, in the eastern Caribbean, announced his death, calling him “one of the titans of post-colonial literature and the arts.”

Dr. Brathwaite, who was also a scholar of history, literature and philosophy and was a professor emeritus at New York University, was interested in what unified the diverse Caribbean before colonialism fractured it.

“The Caribbean,” he said in a 1991 interview for a video series called “Caribbean Writers and Their Art,” “although artificially divided into English speaking, French speaking, Dutch speaking, Spanish speaking, is really part of a whole underground continent of thought and feeling and history.”

The peoples of the Caribbean needed to rediscover this, he said.

“Instead of developing a sense of ourselves,” he said, “we developed a false sense of Europe.”

He spoke of his own rediscovery of the rhythms that became the language of his poetry.

“When I was growing up, I was right there on the beach,” he said, “and my birth was coincident with the sound of the sea, so that if I had to have a rhythm, that rhythm should have been sea song.” Instead, he said, “I had the rhythms of John Keats in my head.”