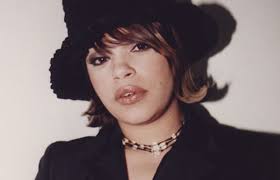 Faith Renée Evans is a multi-platinum Grammy Award winning recording artist, songwriter, arranger and record producer, who was born on June 10, 1973 in Florida USA and raised in New Jersey, USA.   She is also the widow of The Notorious B.I.G. (Christopher Wallace), having married him on August 4, 1994.

Faith is also a New York Times best-selling author, an entrepreneur, a TV executive producer and most importantly — a mother.  With so many hats to be worn, it is undeniable that Faith has a little something for everyone.  Through what has been an equally rewarding and trying career, ask her how she’s come this far and she’ll simply reply, “FAITH.”

With a music career spanning over two decades, Faith has released eight studio albums, with over 18 million albums sold and spawning over 30 singles.  Faith has also performed on 20+ soundtracks and a host of guest appearances during her career.  Faith Evans is a seven-time Grammy nominee; winning “Best Rap Performance by a Duo or Group” in 1998 for “I’ll Be Missing You,” an homage to her late husband and hip-hop legend Notorious B.I.G.

Faith has three Platinum-certified albums under her belt, including: “Faith” (1995), “Keep The Faith” (1998) and “Faithfully” (2001); the Gold-certified “The First Lady” (2005), and the holiday staple, “A Faithful Christmas” (2005).  In 2008, Faith penned her New York Times Best Selling Book, “Keep the Faith: A Memoir” with Aliya King, which won the 2009 African American Literary Award in the “Best Biography/Memoir” category.  The memoir is currently available in hardback, paperback and in e-book format at most major retailers.  In 2010, Faith released her first independent album through her music imprint Prolific Music Group and E1 Music, titled “Something About Faith”.  The lead single “Gone Already” was nominated for “Best Female R&B Vocal Performance” for the 2011 Grammy Awards.  In August 2012, Faith co-created, executive produced and starred in an original reality series, “R&B Divas”, which became cable network TV One’s most watched original premiere in the history of the network and later released a compilation album of the same name.  The “R&B Divas” album earned Faith her seventh Grammy nomination for “Best R&B Album” for the 2014 Grammy Awards.

In 2016, Faith was one of the featured performers on the acclaimed “Bad Boy Family Reunion Tour,” playing to thousands of fans in 19 cities and two countries.

“I remember telling Ms. Wallace years ago that one day it would be really dope if I could do something similar to Natalie & Nat King Cole’s Unforgettable,” says Evans.  “Knowing the love that B.I.G. had for Tyanna & Ceejay, I feel it’s my duty to uphold & extend his legacy, especially his musical contributions.  This project is my creative reflection of the love we had & the bond we will always have. I’m elated to share this musical journey with our fans!”