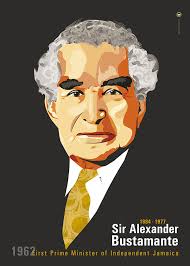 Bustamante began to make his presence felt in Jamaica, the country was still a Crown Colony. Under this system, the Governor had the right to veto at all times, which he very often exercised against the wishes of the majority.

Bustamante was quick to realise that the social and economic ills that such a system engendered, had to be countered by mobilisation of the working class.

Pay and working conditions were poor in the 1920s and 1930s. Failing harvests and the lay-off of workers resulted in an influx of unemployed people, moving from the rural areas into the city. This mass migration did little to alleviate the already tremendous unemployment problem.

Bustamante first impressed his name on the society with a series of letters to The Gleaner and occasionally to British newspapers, calling attention to the social and economic problems of the poor and underprivileged in Jamaica.

The years 1937 and 1938 brought the outbreak of widespread discontent and social unrest. In advocating the cause of the masses, Bustamante became the undisputed champion of the working class. He also confronted the power of the Colonial Governor, declaring, “Long live the King! But Denham must go.”

During the troublesome days of 1938, the security forces were everywhere eyeball to eyeball with Bustamante and the workers. Labour unrests continued on and off.

On September 8, 1940, Bustamante was detained at Up Park Camp, for alleged violation of the Defence of the Realm Act. He was released seventeen months later.

In 1943 he founded the Jamaica Labour Party (JLP), with himself as head. The first general election under Universal Adult Suffrage came in 1944 and the JLP won 22 of the 32 seats.

Sir Alexander became the first Prime Minister of Independent Jamaica in 1962. He retired from active politics in 1967. He died on August 6,1977, at the age of 93.

On October 18, 1969 as per Government Notice 706 Jamaica Gazette, Bustamante was conferred with the Order of National Hero along with his cousin Norman Washington Manley.