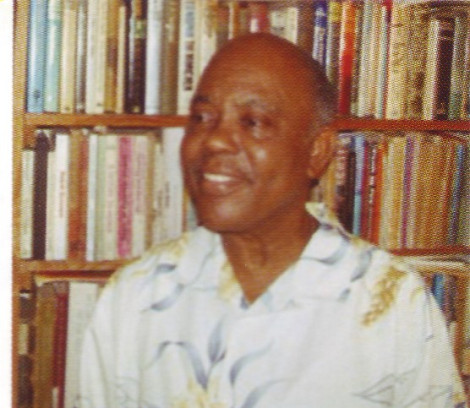 Jacques Egyptien Compton was born in Saint Lucia on July 25th 1927 but was educated in Europe where he read Literature and studied Journalism and Arts Administration. For several years he worked in Europe as a free-lance Writer, Lecturer and Broadcaster. His lectures on Caribbean History and Literature and Culture were delivered at Universities, Polytechnics and Colleges of Education as well as at Secondary Schools in the United Kingdom, Western and Eastern Europe, the Middle East and the Far East, as well as the Caribbean.

In the United Kingdom he founded his own cultural group (Music, Dance and Drama), and put on theatrical performances in several parts of the world. He was also an Impresario in the United Kingdom, offering a platform for many West Indian and African performing artistes.

He has been actor on stage, television and film, musician and singer.

He has written two full-length folk ballets, ’Erzulie Doudou’ based on the life of Erzulie, the goddess of Love and Beauty in Haitian folk mythology and ‘The Chosen One’ based on the Shango, the religion of the Yoruba people of Eastern Nigeria, but as practiced in Trinidad and Tobago.

During the lifetime of Radio Antilles he contributed a weekly programme to that station on Educational and Cultural affairs from the United Kingdom.

From 1977 to 1979 he was Manager of Radio Saint Lucia, his island’s national radio station, and he introduced several new programmes, including Radio Plays by Caribbean and African playwrights, Short Stories on Wednesday mornings, Book at Bedtime in the evenings, ’Youth Talk’ in which primary and secondary school children participated and were taught Radio Journalism and introduced to Radio Broadcasting, News in French Creole, a weekly programme entitled ‘Voix Sainte Lucie,’ and ‘Commentary.’ a week-end programme on Radio. He was relieved of that post when there was a change of Government in 1979. He returned to the United Kingdom in 1979 and joined the Civil Service as an Arts Officer with offices based in Wembley in the London Borough of Brent, Middlesex.

In 1985 he returned to Saint Lucia to take up the appointment of Director of Culture with the Government of Saint Lucia and in that capacity represented the Government of Saint Lucia at several International and Commonwealth Cultural Festivals as well as Commonwealth and International Conferences in Europe, the Far East, Latin America and the Caribbean. In 1986 he persuaded the government of Saint Lucia to participate at a Caribbean Festival in the United Kingdom and took to that festival, two plays, ‘Banjoman’ by Roderick Walcott and Derek Walcott’s ‘Ti-Jean And His Brothers’ which were well received. It was the first time that a play by Roddy Walcott, twin brother of Nobel Laureate, Derek Walcott, was seen outside the Caribbean.

In January 1982 he was elected a Fellow of the Royal Society of Arts and in June 1990, the Government of the Republic of France appointed him a Chevalier De L’Ordre Des Arts Et Des Lettres. In January 2008 the Open Campus of the University of the West Indies, Saint Lucia, presented him with an Award in recognition of his contributions to Culture and the Arts in Saint Lucia.

In recent years, he had worked full time at his writing, contributing articles, book and theatre reviews to the local newspapers and had presented a weekly television programme entitled ‘Commentary’ specializing in educational and cultural matters.

He has had short stories published in the United Kingdom and in  the Caribbean and has completed the manuscripts of five novels: ‘The Orphan,’ ‘A Troubled Dream,’ ‘Crossroads At Grande Riviere,’ ‘Nanette,’ and ‘In The Prison Of A Life,’ four novellas and a scholarly work on the Caribbean entitled ‘The West Indians–Portrait of A People.’

Three other recently completed manuscripts are entitled ‘Culture and Society in Saint Lucia,’ ‘The Shroud of Night—The Treatment of the Negro in Modern Literature in English’ and ‘Five Saint Lucian Novelists and Their Novels.’ A book of Essays soon to be completed is entitled ‘Narrative And Dialogue In The Paintings Of Dunstan St. Omer – Essays on Art and Literature.’

Three of his books, the novel, ‘A Troubled Dream’ and a textbook on Theatre Arts, entitled ‘An Introduction To Theatre Arts,’ for students taking that subject for the CXC and a scholarly work entitled ‘The West Indians—Portrait of a People,’ were published by Hansib publishers in England in 2008. A fourth, a short work entitled ‘Community Arts and Cultural Identity in the West Indies—Saint Lucia, A Case Study’ has also been completed but not yet published.

Jacques Compton died on July 18th in St. Lucia. A tribute event organized by the Cultural Development Foundation will be held on Monday July 25th at the Cultural Centre at 7 pm. A funeral service will be held at the Cathedral of the Immaculate Conception at 2pm on Tuesday July 26th after which his body will be cremated.