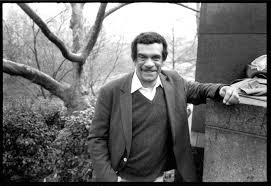 Born Derek Alton Walcott on the island of Saint Lucia under the yoke of colonialism on 23 January 1930, poet and playwright Derek Walcott was trained as a painter but turned to writing as a young man.

He published his first poem in the local newspaper at the age of 14. Five years later, he borrowed $200 to print his first collection, 25 Poems, which he distributed on street corners. Walcott’s major breakthrough came with the collection In a Green Night: Poems 1948-1960 (1962), a book which celebrates the Caribbean and its history as well as investigates the scars of colonialism. Throughout a long and distinguished career, Walcott returned to those same themes of language, power, and place. His later collections include Tiepolo’s Hound (2000), The Prodigal (2004), Selected Poems (2007), White Egrets (2010), and Morning, Paramin (2016). In 1992, Walcott won the Nobel Prize in Literature. The Nobel committee described his work as “a poetic oeuvre of great luminosity, sustained by a historical vision, the outcome of a multicultural commitment.”

From the 1950s Walcott divided his time between Boston, New York, and Saint Lucia. His work resonates with his childhood influences, shifting between Caribbean patois and English, and often addressing ancestry.

“Colonials,” he wrote after contrasting the immense artificial lights of big cities to the dimness and rust and rot of our own towns, “we began with this malarial enervation: that nothing could ever be built among these rotting shacks, barefooted backyards and moulting shingles; that being poor, we already had the theater of our lives. In that simple schizophrenic boyhood one could lead two lives: the interior life of poetry, and the outward life of action and dialect.” The twilight says much about our islands: it is beautiful yet forgettable, a transition between day and night, a space not quite one thing or the other, like the sea’s phosphorescence. The twilight is a sublime contradiction, which means it is closest to describing reality—for Caribbean and cosmos alike, to be sure, but certainly for Caribbean.

In “Homecoming: Anse La Raye,” the students in school are “solemn Afro-Greeks, eager for grades,” learning “of Helen and the shades / of borrowed ancestors.” The theme becomes even more explicit in another poem, “Sea Grapes.” “That sail which leans on light,” Walcott writes,

tired of islands,
a schooner beating up the Caribbean

for home, could be Odysseus,
home-bound on the Aegean;
that father and husband’s

longing, under gnarled sour grapes, is
like the adulterer hearing Nausicaä’s name
in every gull’s outcry.

The references at once braided Walcott to the broad tradition of Western literature and reified the everyday reality of the Caribbean.

“These continuing polarities shoot an electricity to each other which is questioning and beautiful and which helps form a vision altogether Caribbean and international, personal (him to you, you to him), independent, and essential for readers of contemporary literature on all the continents.”

Known for his technical control, erudition, and large canvases, Walcott was, according to poet and critic Sean O’Brien, “one of the handful of poets currently at work in English who are capable of making a convincing attempt to write an epic … His work is conceived on an oceanic scale and one of its fundamental concerns is to give an account of the simultaneous unity and division created by the ocean and by human dealings with it.”

Many readers and critics point to Omeros (1990), an epic poem reimagining the Trojan War as a Caribbean fishermen’s fight, as Walcott’s major achievement. The book is “an effort to touch every aspect of Caribbean experience,” according to O’Brien who also described it as an ars poetica, concerned “with art itself—its meaning and importance and the nature of an artistic vocation.” In reviewing Walcott’s Selected Poems (2007), poet Glyn Maxwell ascribes Walcott’s power as a poet not so much to his themes as to his ear: “The verse is constantly trembling with a sense of the body in time, the self slung across metre, whether metre is steps, or nights, or breath, whether lines are days, or years, or tides.”

Walcott was also a renowned playwright. In 1971 he won an Obie Award for his play Dream on Monkey Mountain, which the New Yorker described as “a poem in dramatic form.” Walcott’s plays generally treat aspects of the West Indian experience, often dealing with the socio-political and epistemological implications of post-colonialism and drawing upon various genres such as the fable, allegory, folk, and morality play. With his twin brother, he cofounded the Trinidad Theater Workshop in 1950; in 1981, while teaching at Boston University, he founded the Boston Playwrights’ Theatre. He also taught at Columbia University, Yale University, Rutgers University, and Essex University in England.

In addition to his Nobel Prize, Walcott’s honors included a MacArthur Foundation “genius” award, a Royal Society of Literature Award, and, in 1988, the Queen’s Medal for Poetry. He was an honorary member of the American Academy and Institute of Arts and Letters. He joined the ancestors on 17 March 2017.

Sources: Derek Walcott: Poet of Twilight, Poet of the Caribbean by Gabrielle Bellot