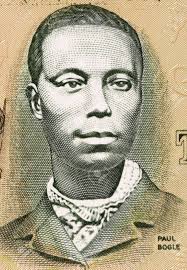 Paul Bogle, it is believed, was born free about 1822. He was a Baptist deacon in Stony Gut, a few miles north of Morant Bay, and was eligible to vote at a time when there were only 104 voters in the parish of St. Thomas. He was a firm political supporter of George William Gordon.

Poverty and injustice in the society and lack of public confidence in the central authority, urged Bogle to lead a protest march to the Morant Bay courthouse on October 11, 1865.

In a violent confrontation with full official forces that followed the march, nearly 500 people were killed  and a greater number was flogged and punished before order was restored.

Bogle was captured and hanged on October 24, 1865; but his forceful demonstration achieved its objectives. It paved the way for the establishment of just practices in the courts and it brought about a change in official attitude, which made possible the social and economic betterment of the people.