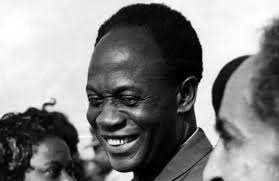 Dr. Kwame Francis Nwia Kofie Nkrumah, was a pan-Africanist, and a member of the activist group known as ‘The Big Six’, and one of the founders of the United Gold Coast Convention. In 1957, Nkrumah became the first President of Ghana after independence from colonial rule from Britain, serving until February 1966, when he was removed from power in a coup d’etat.

Nkrumah was born in Nkroful, the then-Gold Coast, on the 28th of September, 1909, into the small Nzima ethnic group. Dr Nkrumah studied at Achimota School in Accra, and studied & worked in the USA and Britain, gaining a Batchelor of Arts degree at Pennsylvania’s Lincoln University in 1939, and a Master of Science (education) & Master of Arts (philosophy) in 1942-1943, also becoming a notable figure in pan-Africanist circles.

Returning home in 1947, Dr Nkrumah became general-secretary of the newly-established United Gold Coast Convention (UGCC), before breaking away from the UGCC in 1949 after disagreements with conservatives within the party, to form his own Convention People’s Party (CPP).

It was during the period of the UGCC that Dr Nkrumah became involved in an incident in which a demonstration by Gold Coast World War II veterans, who were demonstrating for the release of service pension entitlements. Dr Nkrumah, along with other members of the UGCC, particularly Dr J.B. Danquah, supported a peaceful march on Christianborg Castle, at the time the seat of British rule, with the intent of submitting a petition to the colonial Governor, Sir Gerald Creasy.

During the march on the 28th of February 1948, three veterans were killed when a police officer open fire on the unarmed demonstrators. The same day, a cable sent by the UGCC to London which blamed Creasy for the disturbances in the Gold Coast, and more or less issued an ultimatum for the UGCC to set up an interim government in the Gold Coast. Creasy ordered the arrest of six founding members of the UGCC, including Dr Nkrumah. This measure had the reverse effect on the population of the Gold Coast – ‘The Big Six’, as they became known, gained popularity from their act, and their efforts resulted in significant changes in the path to independence in the 1951 constitution.

Under Nkrumah, the CPP built a large supporter base, becoming the leading nationalist party in the territory. The CPP’s success in the 1951 elections saw Nkrumah become leader of government business, and the following year he became Prime Minister of The Gold Coast.

Maintaining the CPP’s majority at independence from the British Empire in 1957, he became Prime Minister of Ghana, and in 1960, Ghana’s first President, following a constitutional change in 1960. On the 6th of March 1957, Nkrumah addressed all Ghanaian from the capital, declaring “The battle has ended – Ghana is free forever”.

Nkrumah’s high-profile political career after independence was seen at international & domestic level. Internationally, he was widely regarded as the most important African nationalist, an inspiration throughout Africa for those countries seeking independence from foreign rule. He played a leading role in attempting to develop pan-African unity, attempting to bring the political union of the emerging states of Africa, including the idea of a “United States Of Africa”. Although not entirely successful, Nkrumah advocated other African nations to gain independence.

Domestically, his leadership became negative, and later, almost despotic & dictatorial. At the time he ascended to power, the newly independent Ghana had one of the strongest economies in Africa, but by the time he lost power, Ghana was heading towards economic ruin, as a combination of corruption & inefficiency, and his attempts to industrialize Ghana came at the expense of the previously strong-performing cocoa-producing sector. Costly, and largely unsuccessful public works programs also took their toll on the economy.

In 1958, he introduced the preventative detention act, allowing arrest without charge, and imprisonment without trial. Opposition including the trade unions, judiciary, and the universities were brought under tight government control. When railway workers went on strike in 1961, Nkrumah ordered the organizers, and even had political leaders of the opposition party arrested.

In 1964, he declared a Ghana a single-party state, installing himself as “President for Life”. By 1966, his measures had made him increasingly unpopular amongst the Ghanaian population, and although his heavily-censored media made him appear as strong as ever to the outside World, Nkrumah was beginning to losing control.

Furthermore, during his reign, two members of “The Big Six” who had broken from Nkrumah and had become opponents, Emmanuel O. Obetsebi-Lamptey, and Dr Joseph B. Danquah, had died while in custody. The death of these popular figures, and former allies of Nkrumah during the pre-indepedence days, were both under dubious circumstances, and seemed to confirm his abuse of power, and led his popularity to decline even further.

On the 24th of February, 1966, he was overthrown by a CIA-backed military coup d’état led by Lieutenant General Joseph Arthur Ankrah, while on a state visit to Vietnam. Never returning to Ghana, he accepted the invitation of his close friend, President Sekou Toure of Guinea, to go into exile in Conakry, also becoming the honorary Co-President of Guinea.

Diagnosed with skin cancer, and with his health failing, he was flown to Romania in August of 1971 for treatment, remaining there until his death in a Bucharest hospital on the 27th of April, 1972. Initially buried in a tomb in Nkroful, his remains were transfered to a memorial shrine in Accra, the Kwame Nkrumah Memorial, constructed on the site of Nkrumah’s triumphant speech in 1957, under the government of President Jeremiah J. Rawlings, in 1992.

Although his period as ruler of Ghana was ended by an uprising, Nkrumah was, and still is, revered as the founder of an independent Ghana.