Why are white people so obsessed with the N-word? 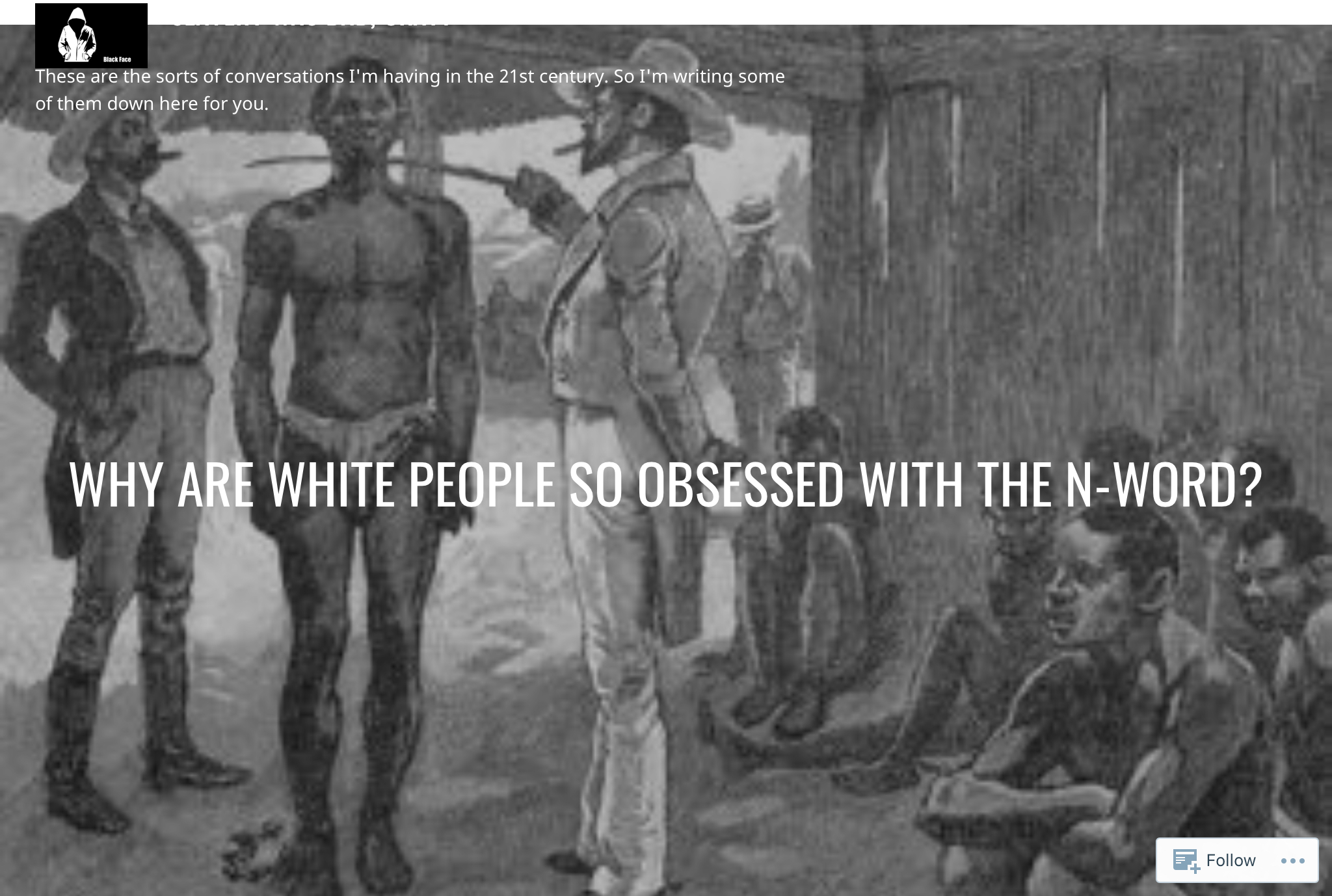 Remember when I wrote about how exhausting this all is? Well this is exactly the sort of shit I was talking about.

The N-Word has an unmistakable power. It is objectively racist. There is no argument to be had. It comes from a time when black people were deemed sub-human, worthy only of being forced into slavery, beaten, raped, and lynched at the whim of white people.

It is a word so loaded with history that the very sound of it cracks like a whip. It screams violence. It is a word that has persisted, used today by the most vile racists (as if there is a scale), as a call-back to the dehumanisation of black people.

It is a racist slur like no other. That is that. And that is all. I’m going to pause here for a moment to let you consider countering what I’ve just said.

Well then allow me to continue.

This isn’t a new discussion. It raises its ugly head from time to time. In 2019, it was brought back into focus as the UK Independence Party (UKIP) stood YouTuber and part-time Treguard impersonator, Carl Benjamin – aka Snarf of Biggleton or whatever – as a candidate for the European Parliament elections.

Benjamin is basically an awful human being – a real toilet-person – and when his 2018 N-Word tirade was brought to light, people again began to challenge ideas about what should and shouldn’t be said, and by whom.

It’s an age old debate, contested for years by historians, artists, political commentators, linguists, and white people who like Kanye West. But the question remains – why are white people so obsessed with the N-Word?

A few arguments are routinely trotted out, largely by white people straining at the neck to be able to use the word as they see fit. You can literally see veins throbbing in their foreheads, their eyes ironically widening as they cry about free speech, intent, context, and then free speech again.

Here’s the thing about free speech. You can say whatever you want. You can absolutely do that. But you can’t then be upset or surprised if you say racist shit and get called out on it, or get punched in your shitty mouth. Freedom of speech gives you the right to say what you like, but not the right to say what you like without consequence. Right, that’s that dealt with. What’s next?

Intent. It’s only racist if the intent is to cause offence – if it’s used as a slur. Nope, no, niet, non, nej, nein, not fucking having it. For reasons I’ve already described, the N-Word is barbed in a way that other words, other slurs even, are not. Whether you intend to cause offence or not, please know that hearing the word, in whatever context, cuts like a knife.

I mean look, if you really feel that it’s all about intent, that you can use it as a term of endearment, then the next time you get served by a black person in a shop or restaurant, look them right in the face, and say, “thanks, n****r.” I fucking dare you.

But you won’t do that. Because you know it’s not okay. You do. That’s why you check yourself when you’re singing along to Gold Digger and you suddenly remember your black friend is out with you.

Which brings me to context.

“I love A Tribe Called Quest, but I still wince when I hear the N-Word over and over again in their songs. Yet it is there, stark and unmistakable – a part of popular culture.”

Yes, the N-Word is used in rap and hip-hop – like a lot. And yes it has been appropriated by black people, especially in the US, but elsewhere too, in an attempt to strip the word of its power, meaning, and history. Jay-Z, for example feels that black people have  taken ownership of the word, reclaiming it as their own.

While I understand the want and need to do that, I personally think it’s misguided. I appreciate others might disagree, but as professor of English at Arizona State University and all-round dude, Dr Neal Lester argues, you can only reclaim a word if it was yours to begin with.

So is it really fair to ask non-black people who spend their money on records and concert tickets to limit their enjoyment of rap and hip-hop music – to refrain from signing along to their favourite Kendrick Lamar, Kanye, or Jay-Z tracks? I’ve got to be honest, it’s a resounding fucking yes from me.

Let me break it down for you.

Black people were stolen from their homes and sold as slaves, chained up in ships and subjected to inconceivable brutality. The unlucky survivors were forced to work for nothing, were regularly beaten, raped, and whipped, while their white masters amassed property and wealth that they could and would never come close to. Their children were born into bondage. They were subjected to continued mistreatment, harassment, beatings, and lynchings, have suffered injustice at every subsequent turn in the form of systemic racism and police brutality – all the while, the N-Word there as a constant reminder of this unspeakably violent history.

But politely ask white people to perhaps, maybe consider just thinking about not singing along to a few rap songs and you get “oh my God it’s so unreasonable, we’re so oppressed!”

What I don’t understand is why white people are so [email protected]£$%&*g obsessed with the N-Word. Is it really too much to ask that you don’t use it. If you’re a fully-fledged Nazi, then go ahead, fill your jackboots, have at it. But if you’re not, then like seriously, just leave it.

And I’m not talking about censorship either. I’m not advocating banning words. I’m suggesting a conscious, volitional decision to just leave that one alone.

If you find yourself in a discussion about whether you should or shouldn’t be able to use the N-Word, the biggest – actually the only question you need to ask yourself is this: Regardless of who else does or doesn’t say it, why is it so important to you to be able to say ‘Nigger’?

Answers on a postcard please.