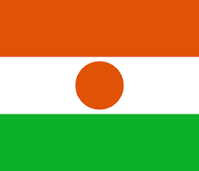 Throughout great powerful Niger
Which makes nature more beautiful,
Let us be proud and grateful
Of our new freedom!
Let us avoid vain quarrels
In order to spare ourselves bloodshed,
and may the glorious voices
Of our race be free of domination!
Let us rise in a single leap
As high as the dazzling sky,
Where stands guard its eternal soul
Which will make the country greater!

CHORUS
Arise! Niger! Arise!
May our fruitful labors
Rejuvinate the heart of this old continent!
And may the song be heard
In the four corners of the Earth
As the cry of a fair and valliant people!
Arise! Niger! Arise!
On the ground and on the wave,,
To the sound of the drums
In their growing rythms
Let us always remain united,
And may each one respond
To this noble future
Which tells us: – Go forward!

CHERRY NATURAL (JAMAICA) SPOKEN WORD
Cherry Natural considers herself as a feminist dub poet or activist, and her sources of inspiration include the late Jamaican poet Louise Bennett. Louise Bennett is well-known as the first Caribbean poet who used Creole or patois consistently and to great effect in her ballads, and who relentlessly stood up for the people's language as opposed to standard English which was then considered as the only passport to social elevation.
Previous post RWANDA NATIONAL ANTHEM
Next post NAMIBIA NATIONAL ANTHEM