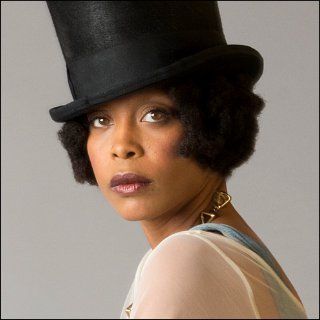 Erykah Badu was born Erica Abi Wright on February 26, 1971, in Dallas, Texas, USA. She would later chant the spelling of her first name to Erykah. “kah” is an Egyptian term for one’s “inner self,” and pair it with the surname, Badu as “badu” is her favorite jazz-riff scat sound.

She was raised by her actress mother, Kolleen Maria Gipson, and so Erykah would dance and sing with her mother from a young age. She attended Booker T. Washington High School for the Performing and Visual Arts and was active in the Dallas music community, performing on a local Dallas radio station under the name DJ Apples. Following her graduation from high school, Erykah attended Grambling State University, a historically black institution in Grambling, Louisiana, majoring in theatre with a minor in quantum physics. After leaving Grambling State, she moved back to Dallas, where she worked as a drama teacher and as a waitress while she recorded a demo.

In 1996, Badu’s demo caught the attention of music producer Kedar Massenburg, who signed her and paired her with D’Angelo to record the song “Your Precious Love.” Kedar Entertainment, then a small start-up label, later merged with Universal Motown.

Erykah’s unique debut album, Baduizm, exploded onto the music scene in 1997 and included “On & On,” “Next Lifetime” and “Appletree.” The album marked a shift in the music of its time and began what was labelled a “neo-soul”, a sub-genre of soul. Baduizm received critical acclaim and won Erykah two Grammy Awards, for best female R&B vocal performance and best R&B album.

Her second LP, Live, was released later that same year. During the recording, Badu was pregnant with her first child, son Seven Sirius, whose father is legendary Outkast artist André 3000. The album went double platinum, and Erykah’s unmatchable talent was established with the album’s memorable, funny and honest song, “Tyrone,” which was completely improvised on stage.

In 1999, Erykah collaborated with the sublime hip-hop group The Roots, to create the song “You Got Me.” She struck Grammy gold again with the song, taking home the trophy for best rap performance by a duo or group. That same year, she made her big-screen debut, portraying the tortured character Rose Rose in The Cider House Rules.

Her third album, Mama’s Gun, was released in 2000 and that year she also contributed to the soundtrack of the Spike Lee film Bamboozled. Erykah toured throughout the next few years, on her “Frustrated Artist Tour,” and in 2003 she released Worldwide Underground, an album that featured some of hip-hop’s finest. The song “Love of My Life Worldwide” features Angie Stone, Queen Latifah and Bahamadia, earned her a fourth Grammy, this time for best R&B song.

In 2003, Erykah gave back to the community in which she had grown up by transforming the dilapidated Black Forest Theater in downtown Dallas into a space for charity events and theatre. It would also serve as the offices for her nonprofit, B.L.I.N.D. (Beautiful Love Incorporated Nonprofit Development), which she founded in 1997 as a means of bringing culture and arts to inner-city areas to cultivate change.

Erykah released her fourth studio album New Amerykah Part One: 4th World War in 2008. Rolling Stone named the album one of the year’s best. In 2009, Badu and Jay Electronica welcomed the birth of their daughter, Mars Merkaba.

Known for speaking her mind, Badu caused an uproar with comments that appeared in a January 2018 article in Vulture. Speaking reharding comedian Bill Cosby and the accusations of sexual assault against him, she said, “I see good in everybody. I saw something good in Hitler.” Asked to elaborate, she pointed out that Hitler was a painter, adding, “He had a terrible childhood. That means that when I’m looking at my daughter, Mars, I could imagine her being in someone else’s home and being treated so poorly, and what that could spawn. I see things like that.”

The following year in 2019, more controversy was caused when Erykah spoke on the subject of singer R. Kelly, who was facing accusations of sexual abuse. During a January concert in Chicago, she drew boos from the audience members when she said she was “putting up a prayer right now for R.” She followed her comments up with a tweet that read: “I love you. Unconditionally. That doesn’t mean I support your poor choices. I want healing for you and anyone you have hurt as a result of you being hurt. Is that strange to you ? That’s all I’ve ever said. Anything else has been fabricated or taken out of context.”