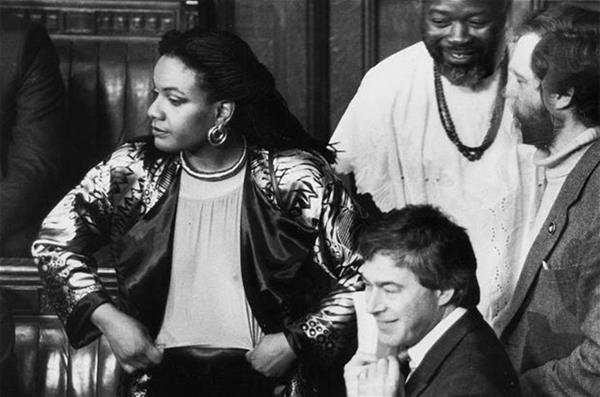 Diane Abbott is a Labour Party politician who made history by becoming Britain’s first black female MP. She was originally elected in 1987. Thirty years later, following a full, varied and often challenging career in politics, she remains the Member of Parliament for Hackney North and Stoke Newington.

Diane was born in London in 1953 to Jamaican parents, her father a welder and her mother a nurse, who had immigrated to Britain a few years earlier. She attended Harrow County Grammar School, the only black pupil at that time. She then went on to study a Masters degree in History at Newham College, Cambridge. She was one of only three black women at the college and described the experience of studying there as “Meeting class and privilege head-on”.

After graduating in 1976, Diane joined the government, working for two years as a civil servant at the Home Office. In 1978 she became a Race Relations Officer at the lobby group National Council for Civil Liberties (now Liberty) and in 1980 embarked on a successful career in journalism. In addition to freelance assignments, she worked as a researcher and reporter at Thames Television and for the breakfast television company, TV-am. She also worked as the Press Officer at the Greater London Council and as the Head of Press and Public Relations at Lambeth Council.

Having joined the Labour Party as a teenager, Diane’s political career began in 1982 when she was elected to Westminster City Council on which she served for four years. In 1987 she was selected as the Labour Party candidate for the London constituency of Hackney North and Stoke Newington and won the seat with a convincing majority. This made her the UK’s first ever black female MP.

In parliament, much of her work has centred on education, crime, civil liberties, immigration and international issues. She has served on a number of committees, including the House of Commons Treasury Select Committee throughout much of the 1990s and, later, the Foreign Affairs Select Committee. She has been a fervent supporter of human rights throughout her parliamentary career and in 2008 she won a special award from Liberty for her achievements in this area.

Diane has become known for her strength of belief and her forthright and occasionally controversial views. On the left of the party, she frequently proved problematic to Labour leader Tony Blair during the ‘New Labour’ era when his reforms meant the abandonment of many traditional socialist policies. Not only was Diane highly critical of Blair but she frequently defied the party whip on issues such as tuition fees and the Iraq war.

In 2010, having been re-elected to her parliamentary seat with a doubled majority, Diane made the ballot for the Labour leadership contest. Her campaign was unsuccessful but helped to promote her agenda and raise her profile. Under Ed Milliband’s leadership, she was propelled to the front benches and became the shadow Public Health Minister. Only a year later The Telegraph described her as one of Labour’s best front bench performers.

She is founder of the London Schools and the Black Child initiative, which aims to raise educational achievement levels amongst Black children. For this she hosts an annual conference for educators, children and their parents and an annual academic awards ceremony. She recently set up a special parliamentary committee to investigate gun crime and she chairs the All Party Parliamentary British-Caribbean Group. She’s also an experienced public speaker and broadcaster and, until recently, appeared weekly on the BBC’s political discussion programme, This Week, where viewers often enjoyed her sparring with old school friend and former Conservative minister, Michael Portillo.

She is frequently the subject of extreme racist and misogynistic abuse and intense media scrutiny. Diane came under heavy criticism during the run up to the recent snap General Election after a couple of unsuccessful interviews. It later transpired that she has been diagnosed with type 2 diabetes and was suffering a bout of ill health. She took a step back from the campaign and the Labour front bench shortly before the election in order to recuperate.

Nevertheless, despite setbacks and sustained attacks, she remains undaunted and as determined as ever to work in the service of her community. Diane was re-elected to her seat with her biggest ever majority. What better way to celebrate the 30th anniversary of her becoming an MP and silence her critics than with such an overwhelming endorsement from the people she represents.

SPECIAL EDUCATIONAL NEEDS/LEARNING DIFFERENCES
You or your child's nursery/school/college notice that you child is not progressing, or is having a significantly greater difficulty in learning than other children of the same age.
Previous post HAITI NATIONAL ANTHEM
Next post DAVID LAMMY