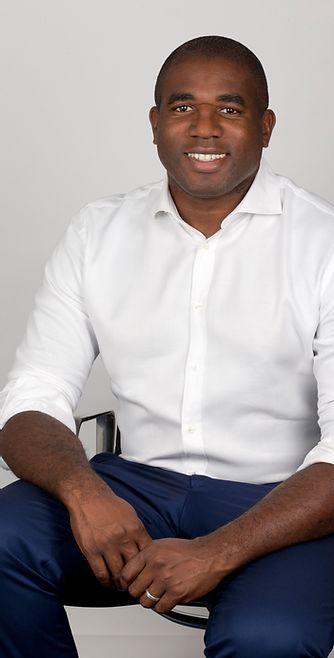 David is the Labour MP for Tottenham. He has been the MP for his home constituency since 2000. In April 2020, David was appointed the Secretary of State for Justice.

David was born in Tottenham in 1972, one of five children raised by a single mother. David was called to the Bar of England and Wales in 1994, practised as a barrister in England and the United States and became the first black Briton to study a Masters in Law at Harvard Law School, graduating in 1997.

David served for 8 years (2002-10) as a Minister in the last Labour government, including as Culture Minister and Higher Education Minister, and was appointed to the Privy Council in 2008. As a Minister in the Department of Health David oversaw the introduction of four hour waiting times in Accident and Emergency Departments and as Minister of State for Higher Education and Skills established the Skills Funding Agency and the National Apprenticeship Service.

David has been one of Parliament’s most prominent and successful campaigners for social justice. David led the campaign for Windrush British citizens to be granted British citizenship and paid compensation by the government, forcing the Home Secretary to guarantee the citizenship of Commonwealth nationals, set up a specialist Commonwealth Taskforce and establish a compensation scheme.

In the last Parliament, David led a successful campaign for diversity to be included in the BBC’s Charter as a Public Purpose, with the BBC setting ambitious diversity targets. In 2016 David launched the Save Our Apprenticeships campaign, following a government announcement of up to 50% cuts in funding for young people in deprived areas, forcing the government into a u-turn, the introduction of a 20% payment for  16-18 year olds and a separate fund for disadvantaged areas. In 2016 David also led a successful cross-party campaign opposing the Government’s plans to privatise the Land Registry, resulting in Ministers dropping the plans and the Land Registry staying in public hands.

David has led a high-profile campaign calling on Oxbridge to improve access for students from under-represented and disadvantaged backgrounds. In May 2018 the University of Oxford announced a £150 million investment in its outreach programmes and committed to publishing annual admissions reports, and the University of Cambridge announced plans to introduce a foundation year. In March 2018 Comic Relief announced that it will end “white saviour” charity appeals, after pressure exerted by David’s campaign.

Since the Grenfell Tower fire David has been at the forefront of the fight for justice for the Grenfell families. David was the first Member of Parliament to challenge the gambling issue on Fixed Odds Betting Terminals, launching the Stop The FOBTs campaign in 2013. In 2018 the government announced plans to cut the maximum stake on FOBTs to £2 per spin.

In January 2016, the then Prime Minister David Cameron asked David to lead an independent review into the treatment of, and outcomes for, Black, Asian and Minority Ethnic individuals in our criminal justice system. The Lammy Review was published in September 2017, and included 35 wide-ranging policy recommendations for Government and the criminal justice sector. In April 2018 the Home Secretary asked David to join the Government’s Serious Violence Taskforce.

David is an Ambassador for Action Aid, President of the British and Foreign School Society and a Trustee of the National Youth Theatre as well as a Patron of a number of charities in Tottenham. He has spoken at the US Congress and Harvard University and is a Fellow of the University of Birkbeck, St John’s College, Durham and City Lit.  ​

David is also the author of Out of the Ashes: Britain after the riots, an analysis of the long-standing causes of the 2011 riots. David is a regular contributor to national newspapers and publications including The Guardian, The Times, The Independent, New Statesman and others, and appears regularly on television and radio.

David lives in Haringey with his wife and three children.