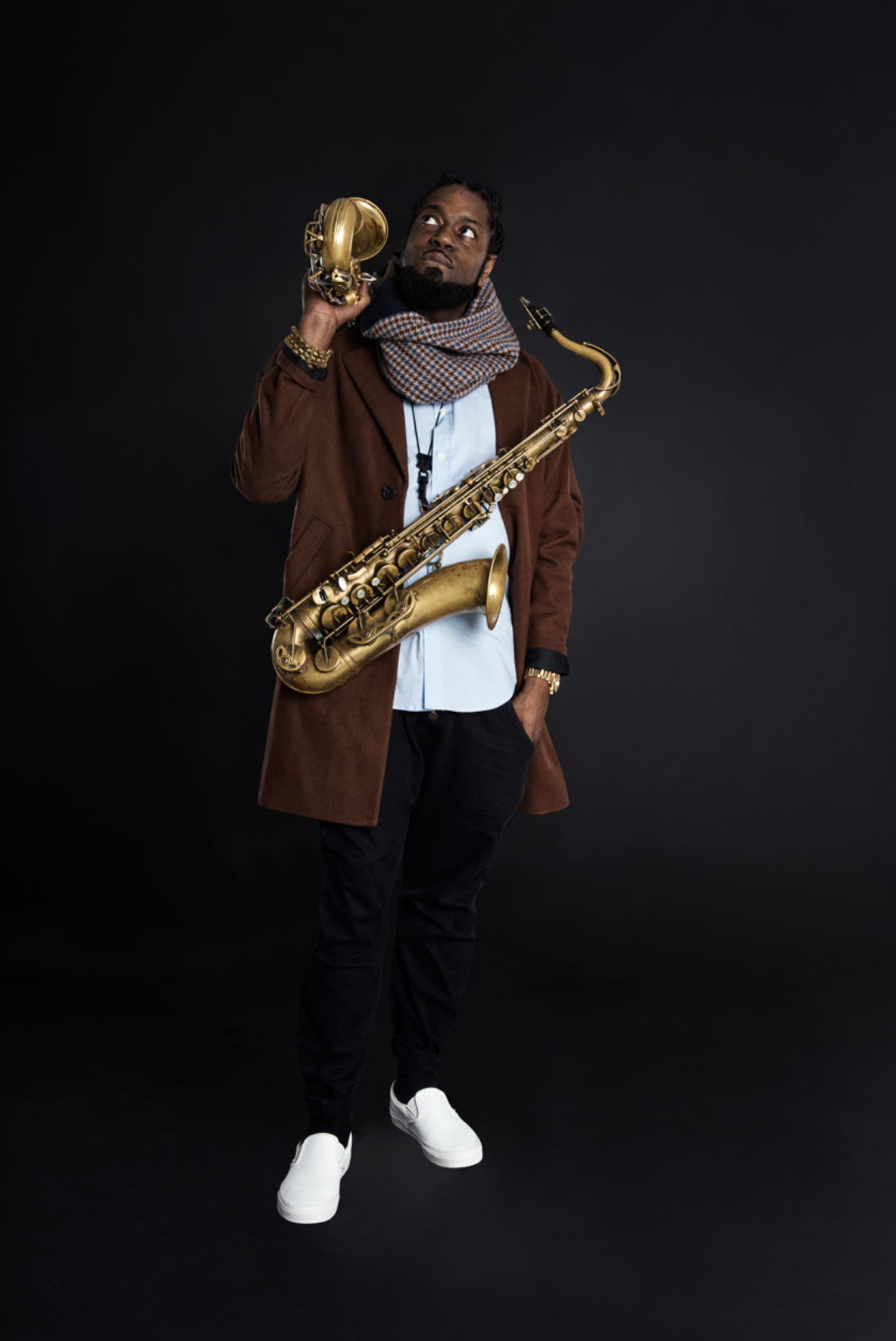 “The one thing these people want is to silence us and that isn’t something I will give in to.”

Soweto was born on 10 January 1978 in London, England to parents of Bajan (father Don) and Jamaican (mother, Yvette) origin He began playing saxophone at the age of 9, having already learned to play the clarinet.

After meeting Wynton Marsalis, he discovered a passion for jazz and studied Modern History at Oxford University. In 2001, he formed his own trio, The Soweto Kinch Trio with Michael Olatuja on bass and Troy Miller on drums, performing at the Royal Festival Hall and the Cheltenham International Jazz Festival. His first album, the sublime Conversations with the Unseen, was released in 2003 and garnered a Mercury Prize.

“For African people, music is part of an entire way of engaging with the sacred. If you feel something emotional in the music, it’s not because that’s an F sharp being played, it’s something far deeper.”

Taken from Soweto’s website (where ever possible Still We Rise likes to use what the subject of the entry has to say):

Award winning alto-saxophonist and MC Soweto Kinch is one of the most exciting and versatile young musicians in both the British jazz and hip hop scenes. Undoubtedly, one of the few artists in either genre with a degree in Modern History from Oxford University he has amassed an impressive list of accolades and awards on both sides of the Atlantic – including a Mercury Music Prize nomination, two UMA Awards and a MOBO for best Jazz Act in 2003. In October 2007, he won his second MOBO Award, at the O2 Arena, London where he was announced as the winner in the Best Jazz Act category- fending off stiff competition from the likes of Wynton Marsalis.

His skills as a hip hop MC and producer have also garnered him recognition in the urban music world: having supported the likes of KRS ONE, Dwele and TY, and being championed by the likes of Mos Def, Rodney P and BBC 1-Xtra’s Twin B.

Kinch’s projects also extend beyond recorded albums. Writing the score for Jonzi D’s Hip Hop Theatre production Markus the Sadist (2010), and Sampad’s In The Further Soil (2010), a dance-theatre. Kinch also wrote and acted in the latter piece, which toured throughout India for a month.

Most recently, he has collaborated with the BBC and Drum and Bass producer Goldie. By Royal Appointment is 3-part prime time reality music show, following Goldie, Soweto, Guy Chamber and Ms Dynamite as they discover and coach a group of 12 vulnerable young mentees towards their first live performance before [words removed] Harry at Buckingham Palace. Kinch, describe how the programme (due for transmission on the 23rd February, 2011) really allowed him to extended his work as an curator and mentor, “it was a radically fresh approach to discovering and nurturing new talent, and an antedote to the usual pop formulae and manufactured music.”

The Flyover Show is Soweto’s flagship project. Currently in its 5th year, this groundbreaking daylong, music and arts festival takes place in its unusual setting beneath a motorway flyover in Birmingham. 2011’s years event continued a theme from 2010, celebrating black male icons who’ve been influential in successful in redefining Britishness. Featuring artists as divergent as Goldie, Akala and Omar the festival continues to build on its reputation, bringing world class rostra to an often neglected corner of inner city Birmingham – its previous guests having included Bashy, Ms Dynamite, Janet Kay, Ty, Speech Debelle and Jonzi D to name a few.

Following on from links made during his time in India and South Africa, Soweto is preparing to extend the The Flyover Show concept, globally: taking breakout performances abroad and working with artists from the Dharavi slum of Mumbai and in Johannesburg. The vision and impact of this idea continues to grow, transforming derelict and abandoned spaces into exciting creative spaces, and presenting a new model of urban renewal.

Kinch also continues to curate seasons of The Live Box, a Birmingham based jam session and showcase that has been run from venues across Birmingham for over 9 years. Moreover, he was invited as a special guest curator at the Harrogate Festival 2011. Soweto’s 2010 release The New Emancipation drew its inspiration from 19th century work songs and early blues, exploring the modern resonances of the emancipation story. From debt/wage slavery, to creative oppression in the music industry and ideas of race in a post-Obama age it combined this rich musical inheritance and revisited it with stellar jazz ensemble and modern hip hop production. Number one on the Rise Best Albums of 2010, the album featured a prestigious international lineup, including Byron Wallen, Justin Brown (US), Eska Mtungwazi, Femi Temowo, Shabaka Hutchings and Harry Brown among others.

The ‘Legend of Mike Smith’ tour sees Soweto Kinch presenting all new material in anticipation of a new album of the same name. The performance draws on Dante and The Seven Deadly sins, telling the tale of a young MC caught in a very modern world of temptation. Featuring a core trio including Karl Rasheed Abel on bass and Shaney Forbes on Drums the subject matter allows Kinch to explore the full breadth of human emotion in Hip Hop and jazz form. It will be touring extensively from February 2013 onwards.

‘I’m really excited about these shows, the stripped trio format allows me more harmonic freedom and space to deliver lyrics. Moreover, I’m excited about integrating new things into the show, such as tenor sax and live looping’ – Soweto Kinch