The Fight to Stop Police Being Stationed in British Schools 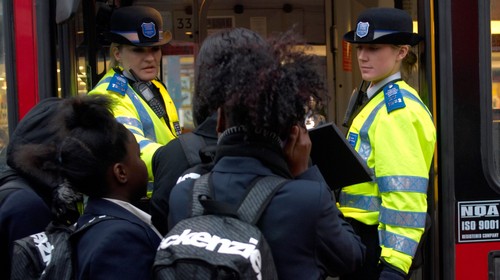 Greater Manchester Police has committed to placing 20 officers in schools in the year 2020/2021. The No Police in Schools campaign calls the plan “bad for all young people”.

Earlier this year in Manchester, a city in the north of England, teachers, school children and others in the education system started to notice something. During school hours, difficult behaviour in schools was increasingly being dealt with by the police. Officers would either come into the school during behavioural incidents, or were being permanently stationed at schools. It was worrying.

“From the community, this dialogue started to arrive that gave us the sense that something was starting to increase and it was being done quite subtly,” Roxy Legane, director of the anti-racism children’s network Kids of Colour, tells me. “We weren’t completely sure of what it was looking like, but something needed to be explored there.”

The No Police in Schools campaign’s aim is straightforward: it seeks to combine the expertise of academics, teachers, unions, community leaders and organisations like Kids of Colour and NPMP to fight the expansion of police presence in Manchester schools. The campaign started officially in March, a month before the death of George Floyd in police custody would spark a global campaign to abolish the police. Alongside the Black Lives Matter movement, the pandemic has also placed increased scrutiny on the police and in particular, their treatment of Black people. In recent weeks, VICE reported an increase in stop and searches targeting Black people, while the Guardian in association with Liberty found that fines associated with coronavirus legislation disproportionately affect BAME people.Tech

“[Having police in schools] is bad for all young people – education should be a safe space for learning but of course, what we know about policing, is that it disproportionately targets and harms Black and brown young people,” Legane says. “When you put that into school settings, it’s those demographics that are really going to feel the sharp end of policing in those schools.”

“For young Black kids, and young Black boys, this then sees them enter this school to prison pipeline,” she adds, “and a potential entry to the criminal justice system.”

In March, No Police in Schools published an open letter to Andy Burnham, Mayor of Manchester, outlining their concerns with the increased police presence in schools – an initiative between Greater Manchester Police and the Greater Manchester Combined Authority, which he oversees. In the letter, Legane and Dr Remi Joseph-Salisbury, an academic and head of NPMP, detailed the problems with police officers in schools. They listed the lack of consultation, the history of institutional racism, the fact that police officers are more likely to be placed in schools in working class areas, and that putting police in schools “transforms learning environments into places of surveillance and criminalisation.” It was signed by over 400 people.

Burnham responded to the letter, citing a concern over violence in schools. In April, he wrote: “We want the police presence in schools to be a vehicle for rebuilding a relationship between the police and individuals who make up our diverse and wonderful Greater Manchester communities.”

VICE News reached out to Andy Burnham’s office and was directed to a recent statement on the Black Lives Matter movement, as well as a new Serious Violence Action Plan. The plan stated: “Many senior leaders in schools and colleges have asked for dedicated police officers or community support officers to assist them in preventing knife crime and serious violence, as well as more quickly and effectively responding to incidents when they occur.”

“We want the police presence in schools to be a vehicle for building positive relationships between young people and the police,” it continued. “Not only can this help to promote awareness of risk amongst young people, how to keep safe and inculcate pro-social behaviour, it can also support individual young people who are vulnerable.”

For Legane, and the No Police in Schools campaign, this isn’t possible, nor does she believe, according to her research, that there is a demand for police from teachers or students. “I think there is a demand from a smaller group of headteachers,” she says. “We know that we have young people, parents, community leaders and teachers that do not agree with the implementation but also lots of people who haven’t been consulted at all.”

Malia* is a student who has experience of a police officer being at her school, and says it has been detrimental to her mental wellbeing.

“The fact of there being police in school is alone something that causes a massive element of fear,” she says. “This was especially true for the Black kids because police have not been helpful or positive in most of our lives.”

“The school used it as a way to cause fear, not to make people feel safe,” continues Malia. “I don’t at all see how it was helpful when I’d go and see the headteacher and the police officer is with them because they want to show us there are ‘consequences’. I felt like a criminal being escorted out of school by the school police officer for ‘mine and everyone else’s safety’.”

“When young people are going back to school after actually what is one of the most difficult periods for them after COVD-19 – particularly for Black and brown communities – they could be going back to school where funding and resources should be put into their pastoral needs,” says Legane, “[Instead], they’re going back to a scenario where there are police officers in schools.”

*Name has been changed.

Lovers Rock Thursdays
Lovers Rock Thursdays, starting 26 May 2022. Lovers Rock/Revival/Rare Groove/Soul. Near Fulham Broadway station.
Previous post Black People in the UK Are Going to Jail for Crimes They Didn’t Commit. Here’s Why
Next post Say Their Names: 12 Victims of Police and State Brutality in the UK