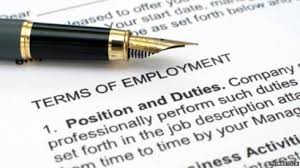 All employees have an employment contract with their employer. A contract is an agreement that sets out an employee’s:

Employees and employers must stick to a contract until it ends (for example, by an employer or employee giving notice or an employee being dismissed) or until the terms are changed (usually by agreement between the employee and employer).

If a person has an agreement to do some work for someone (like paint their house), this isn’t an employment contract but a ‘contract to provide services’.

As soon as someone accepts a job offer they have a contract with their employer. An employment contract does not have to be written down.

If there’s nothing clearly agreed between you and your employer about a particular issue, it may be covered by an implied term – for example: