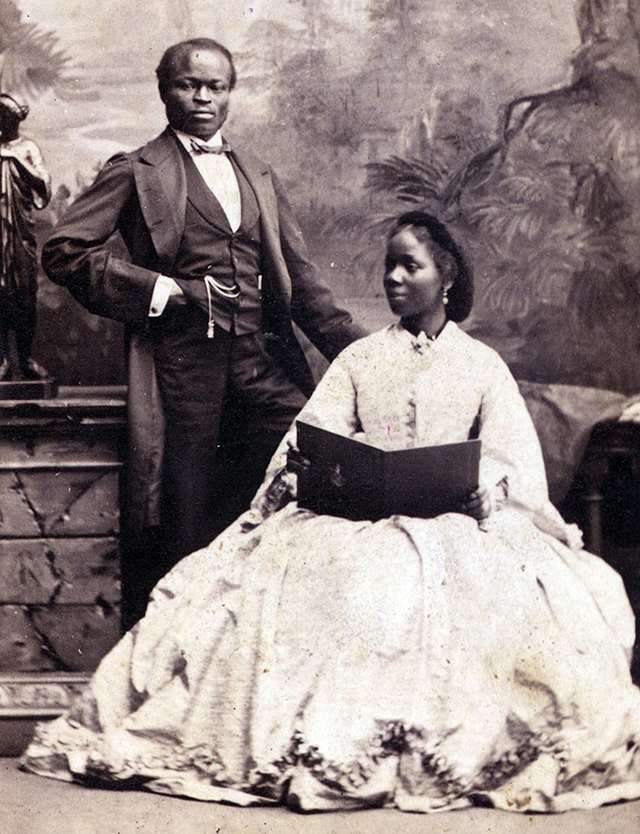 Sarah Forbes Bonetta, a princess of the Egbado clan of the Yoruba people, is best known as the goddaughter of Queen Victoria of Great Britain. Bonetta was born in 1843 in what is now southwest Nigeria. Her parents’ names are unknown as are the names of her siblings who were all killed in the 1847 slave raid that made Bonetta a captive.

Bonetta’s village of Okeadan was attacked by King Gezo of Dahomey, the most notorious slave trading monarch in West Africa in the early 19th century.  Intent on capturing slaves and killing those not taken, Gezo’s men seized the four year old girl.  For reasons that are unclear, the girl was not killed and remained at Gezo’s Court until 1849 when British Commander Frederick Forbes landed the HMS Bonetta in Dahomey to persuade Gezo to give up slave raiding and trading.  Forbes noticed the young girl and bargained for her life.  He persuaded King Gezo to “give” her to Queen Victoria, saying “She would be a present from the King of the Blacks to the Queen of the Whites.” The girl remained with Forbes in West Africa for the next year where she was baptized and given the name Sarah Forbes Bonetta.  Forbes wrote that

“She is a perfect genius; she now speaks English well, and [has] great talent for music… She is far in advance of any white child of her age in aptness of learning, and strength of mind and affection…”

Sarah Forbes Bonetta was taken to Great Britain and met Queen Victoria on November 9th, 1850 at Windsor Castle.  The Queen was impressed by her intellect and entrusted her care to the Schoen family in Palm Cottage, Gillingham when Forbes died early in 1851. The Queen declared Sarah her goddaughter and paid her tutorial expenses.  Young Sarah became a regular visitor to Windsor Castle.

Less than a year after she arrived, however, young Bonetta developed a cough believed to be caused by the climate of Great Britain.  Queen Victoria arranged for her to be sent to what she believed was a better climate for Bonetta in Sierra Leone. There she was educated at the Female Institution, a Church Missionary Society school in Freetown. Bonetta excelled in music and academic studies but was unhappy prompting the Queen to bring her back to England in 1855.

In January 1862, 19-year-old Bonetta was a guest at the wedding of the Princess Royal Victoria, the eldest child of the Queen.  In August of that year Bonetta herself was given permission by Queen Victoria to marry Captain James Pinson Labulo Davies, a 31-year-old wealthy Yoruba businessman from Sierra Leone.  The couple married in an elaborate wedding at St. Nicholas Church in Brighton, England.  Sarah arrived at the ceremony in an entourage that included ten carriages.  The couple lived in Bristol, England briefly before returning to Sierra Leone.

While Davies continued his work, Bonetta began teaching in a Freetown school.  Shortly after the marriage, she gave birth to a girl and was given permission by the Queen to name her Victoria.  The Queen also became young Victoria’s godmother.  In 1867 Sarah and her daughter visited the Queen again. For Sarah this would be her last visit.  Her cough continued and she was diagnosed with tuberculosis.  Bonetta had two more children but died in 1880 at the age of 37.  Queen Victoria continued to provide for Sarah’s daughter.  She supported young Victoria’s education and gave her an annuity.  Young Victoria continued to visit the royal household for the rest of her life. Many of the Bonetta-Davis descendants live in and around Lagos, Nigeria.