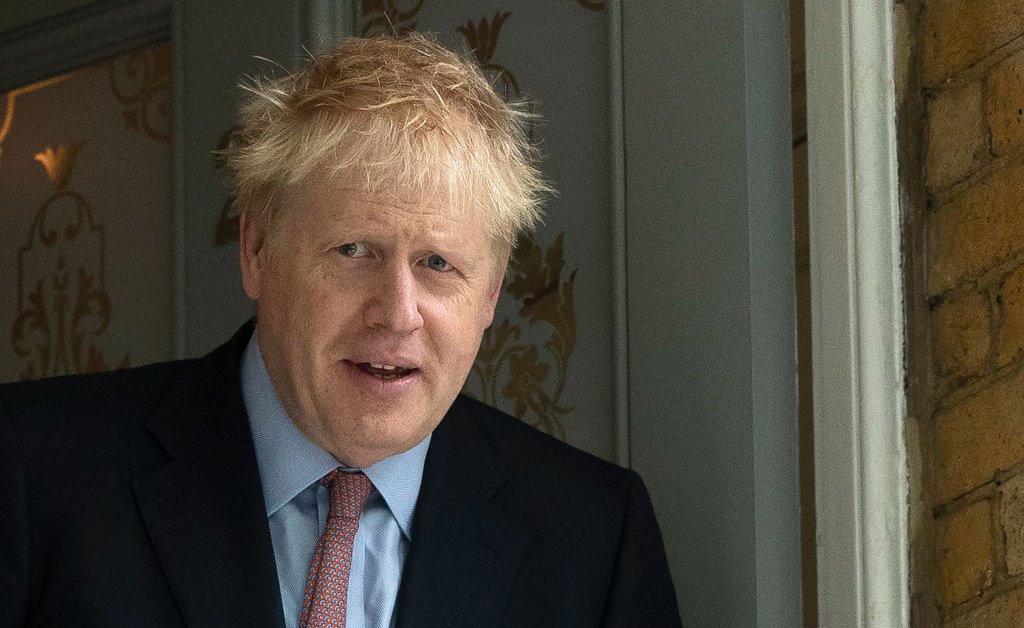 Never forget who you are dealing with. For those who forget the past are condemned to make the same mistakes in the future.

The Conservative party leader wrote in a diary piece for the Independent on Sunday in October 1999 that Tony Blair had made people feel good about getting rich.

“All the young people I know – ie those under 30 – are just as avaricious as we flinty Thatcherite yuppies of the 1980s in fact, they have an almost Nigerian interest in money and gadgets of all kinds.”

Writing in The Guardian:

Writing about a prospective trip by Mr Blair to the Democratic Republic of the Congo, Mr Johnson stated:

“No doubt the AK47s will fall silent, and the pangas will stop their hacking of human flesh, and the tribal warriors will all break out in watermelon smiles to see the big white chief touch down in his big white British taxpayer-funded bird.”

The same column includes the line:

“It is said that the Queen has come to love the Commonwealth, partly because it supplies her with regular cheering crowds of flag-waving piccaninnies.”

This article was published in The Spectator on 2 February 2002 by Boris Johnson, the new Foreign Secretary and former editor of the magazine.

Africa is a mess, but we can’t blame colonialism, 2 February 2002

Believe me, you blush, you fat, white chiefs, at that kind of reception. You feel embarrassed, and obscurely ashamed, and it is that feeling of shame I wish to confront.

If we were erroneously treated like the Duke of Kent.

imagine with what rapture Africa will greet Tony Blair when he descends next week in his big white bird.

Last year he told the Labour party conference that Africa was a ‘blot on our conscience’. Last week Jack Straw was raging in the Guardian at the iniquities of the colonial legacy.

Heaven knows what the Foreign Office has cooked up for Blair, or quite how this British prime minister will choose to break the winds of change. But we must hope, for the sake of candour and common sense, that he does not blame Britain, or colonialism, or the white man. The continent may be a blot, but it is not a blot upon our conscience.

The problem is not that we were once in charge, but that we are not in charge any more.

Consider Uganda, pearl of Africa, as an example of the British record. Are we guilty of slavery? Pshaw. It was one of the first duties of Frederick Lugard, who colonised Buganda in the 1890s, to take on and defeat the Arab slavers. And don’t swallow any of that nonsense about how we planted the ‘wrong crops’. Uganda teems, sprouts, bursts with vegetation. You will find fruits rare and strange, like the jackfruit, hanging bigger than your head and covered with green tetrahedral nodules. Though delicately perfumed, it is, alas, more or less disgusting, and not even Waitrose is pretentious enough to stock it.

So the British planted coffee and cotton and tobacco, and they were broadly right. It is true that coffee prices are currently low; but that is the fault of the Vietnamese, who are shamelessly undercutting the market, and not of the planters of 100 years ago.

If left to their own devices, the natives would rely on nothing but the instant carbohydrate gratification of the plantain.

You never saw a place so abounding in bananas: great green barrel-sized bunches, off to be turned into matooke. Though this dish (basically fried banana) was greatly relished by Idi Amin, the colonists correctly saw that the export market was limited.

Everywhere the people glide by, rather slowly, on big black bicycles. They are all imported: even now, the Ugandans can’t make their own bikes.

In 1956 Ghana had a bigger GDP than Malaysia, and Egypt and South Korea were economically on a par. Can you really blame colonialism for the subsequent divergence in performance? The Malaysians have air-conditioning and computers; 90 per cent of Ugandans live in Stone Age conditions — round mud huts with a fireplace dug in the floor and raffia mats for beds and a life-expectancy of 42.

It is just not convincing, 40 years on, to blame Africa’s problems on the ‘lines on the map’, the arbitrary boundary-making of the men in sola topis. We went with Unicef to the north of the country, to see the results of the war against ‘Lord’s Resistance Army’, a bunch of millennialist loonies led by one Joseph Kony, a charismatic in Stetson and shades. We were stunned by the testimony of the children who had been kidnapped by Kony, and who have made their way back.

‘We were raping, we were killing,’ one of them told me, before going on to describe how he personally panga-ed a girl who tried to escape. ‘I cut her up,’ he said, a remark that so nonplussed me that I shook his hand and said, ‘Just don’t worry about it. Forget about it.’ I suppose it wasn’t really his fault that he was abducted by Kony, and forced into murder — but then it sure as hell wasn’t our fault.

This is essentially a tribal conflict, between the north and the south. The northern Acholi are kept in vast camps, allegedly to ‘protect’ them, while President Museveni’s troops lackadaisically pursue the rebels. Perhaps you could have drawn the map of Africa differently, to take account of the hundreds of tribes; but no design would have ended the grudge between the Acholi and the Baganda.

As one British official said, ‘I’ve been in Africa for ages and there’s one thing I just don’t get. Why are they so brutal to each other? We may treat them like children, but it’s not because of us that they behave like the children in Lord of the Flies.

And it is absurd, finally, to say that we have turned our backs on Africa. Donor countries provide 52 per cent of Uganda’s public spending, and Europeans and Americans supply a new imperial class of aidworkers, vigorous and exuberantly politically correct. They build latrines, fine concrete structures which will soon be used for habitation, since they are sounder than the huts; they distribute condoms, to the hooting derision of the Karamojong cattle rustlers.

It is not only the Mace and the despatch boxes that we have exported to the Ugandan parliament. With five seats reserved for the disabled, five for ‘youth’ and 54 for women, it is the most politically correct assembly in the world. I will never forget the expression on the faces of the tribal elders who came to meet us by some jacaranda tree. There they were, beaming with pride in some new Unicef-funded municipal shack, when a Norwegian Unicef girl stepped forward. She was wearing lipstick, earrings, court shoes, and she barked, in all seriousness, ‘Where are the women?’

‘Why are there no women in this group?’ she wanted to know, and the poor lads shuffled and scratched their Aids-blotched heads. Almost every dollar of Western aid seems tied to some programme of female emancipation — stamping out clitorectomy, polygamy, bride-price, or whatever. And while some readers may feel vaguely that the African male should not be stampeded into abandoning his ancient prerogatives, one cannot doubt the care — bordering on obsession — with which Western workers pursue their ends.

In the depths of the bush, in halting English, recipients of aid will tell you how ’empowered’ they feel to be ‘stakeholders’ of ‘social support programmes’. It is no surprise that the aid industry is by far the biggest in Uganda, and the one that attracts all the brightest and most ambitious. In the course of five minutes, while driving down a Kampala dirt track, I noted signs boasting the HQs of the following organisations: Uganda Centre for the Development of Marginalised Children; Kampala School for the Physically Handicapped; Send a Cow Uganda; Uganda Network of Aids Service Organisations; Centre for African Development Initiatives; the Uganda Women’s Finance Trust for the Economic Empowerment of Women in Uganda.

Martin Mogwanja, Unicefs man in Kampala, told me there are hundreds more, most of them consisting of a single man in an office hoping to strike lucky with, say, the ever-generous readers of the Daily Telegraph. Of course, aid corrupts and distorts and infantilises; but those considerations are probably outweighed by the short-term good it can do. We saw Western money being used to Aids-test hundreds of expectant mothers, and we saw the counselling they received when their blood serum went cloudy on the glass slide and they knew that they — and their unborn children — had, on average, eight years to live.

Even if you are not convinced that the programmes are beneficial, you should surely not feel guilty about what we are doing. Far from deserting Uganda to its fate, Britain is big there, and getting bigger. Martin the Unicef man was educated at Leeds. The very Kabaka of the Baganda, King Ronnie, a man of surpassing stateliness, is the product of Bradfield and Cambridge. British Airways is up to all sorts of good works. Britain is the biggest bilateral donor, giving £68 million per year; and with 137 million in exports, that looks like a good investment.

This is still a country where too many people squat on their haunches, slowly waving their hands to move the flies from their faces. Too many people are rootling aimlessly for rubbish, competing with the marabou storks. Too many people are dying. But the epidemic is at last diminishing, from a high of 30 per cent, in a population carpetbombed with safe-sex initiatives, and they are wising up to the reasons for transmission (if we love Amanda, and admire Miranda, what do we do with Buganda?). The economy is growing at 6 per cent; and if Museveni is no democrat, he is no Mugabe. If Blair has any sense, he won’t wring his hands over Africa. He’ll urge us all to come here for our holidays — and what could be better than the Murchison Falls.

He’ll talk us into snapping up that little island in Lake Victoria, investing in hotels, TVs, mobile-phone companies.

The best fate for Africa would be if the old colonial powers, or their citizens, scrambled once again in her direction; on the understanding that this time they will not be asked to feel guilty.

Near the beginning of the book Mr Johnson uses an extended metaphor to depict a traffic warden working in Westminster as a “hunter-gatherer” because he is an African immigrant.

“He went down Horseferry Road, past the obelisks with their odd pineapple finials, past the bearded stone Victorians who had conquered the continent from which he came, and he, the colonial, became to hunt in the former imperial metropolis,” Mr Johnson also wrote of the character.

In a separate section describing one mixed-race character’s thoughts about himself, Mr Johnson wrote:

“The interesting thing about his half-caste looks, he decided, was that he didn’t look Negroid.” On another occasion Mr Johnson describes the same character as “the faintest coffee colour”.

He also committed these words to paper:

Writing a column for The Sun newspaper the outgoing Mayor of London recounted a story about a bust of Winston Churchill purportedly being removed from White House by President Barack Obama.