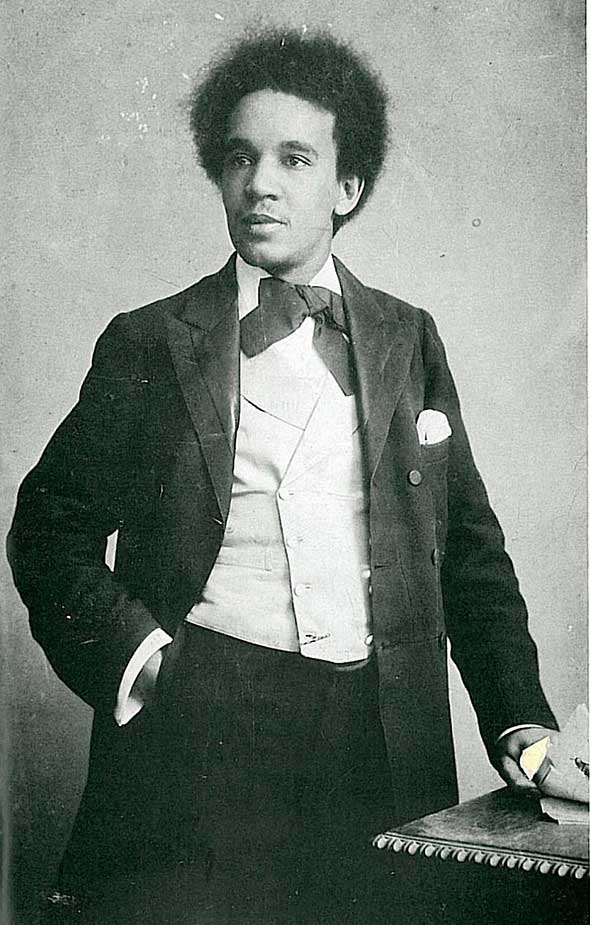 Samuel Coleridge-Taylor was born on 15 August 1875 at 15 Theobalds Road, Holborn, London – just round the corner from Fetter Lane, a spot which Charles Dickens described as the “dingiest collection of shabby buildings ever squeezed together in a rank corner as a club for tom cats”. His parents were registered as Daniel Hugh Taylor, surgeon, and Alice Taylor, nee Holman’.

The young Coleridge-Taylor might never have known his father but he was hardly neglected. Alice Martin, the mother who brought him up in Croydon, married George Evans (1837-c.1908), a railway storeman, with whom he seems to have been on good terms. He received violin lessons from Joseph Beckwith, a local orchestral musician, and he sang from the age of 10 in the choir at St George’s Presbyterian Church, Croydon, and the parish church of St Mary Magdalene, Addiscombe.

He was very well aware of the difficulties he faced because of the colour of his skin: his nickname at school, for instance, was ‘coaley’. But he was a keen student and in 1890 he won a scholarship to the Royal College of Music, originally as a student of the violin, then graduating to studying composition with the composer Sir Charles Villiers Stanford. At a stroke he had levitated into the most influential musical environment within reach, and acquired patrons who could help make his career.

At the Royal College of Music Coleridge-Taylor encountered some of the brightest talents of his time, and most of his early concerts were at the RCM or involved his fellow students. At one of his concerts (March 1896), for instance, two of his most famous colleagues, the young composers Gustav Holst (composer of The Planets) and Ralph Vaughan Williams played in the orchestra. Even before Coleridge-Taylor’s work was being publicly performed August Jaeger, an editor at the music publishers Novello & Co., had been tipped off about his talent, and Novello’s published the first of a series of his anthems, starting a lifelong association. By an interesting coincidence Vincent Novello, originator of the firm, had been taught almost 100 years earlier by the black violinist George Polgreen Bridgetower.

Coleridge-Taylor won the Lesley Alexander composition prize two years running (1895 and 1896), and he met William Hurlstone, his best friend who died early in 1906, a major influence on his taste. In 1896 he also met the African-American poet and novelist Paul Laurence Dunbar, who was visiting London. His meeting with Coleridge-Taylor began a series of collaborations. The songs Seven African Romances (1897), which were their first work together, are light and tuneful, and Dream Lovers (“an Operatic Romance”, 1898) is the story of a Moroccan prince and his friend finding true happiness with two sisters. There are several clues to suggest that Coleridge-Taylor’s true metier might have been musical theatre, but he left the RCM as a highly-esteemed and promising young composer.

Coleridge-Taylor’s talents were recognised and promoted almost immediately. His first major commission came via the composer Edward Elgar, who described him as “the cleverest fellow going amongst the young men”, and recommended him for a commission at the famous and influential Three Choirs Festival, which rotates between Gloucester, Hereford and Worcester.

In September 1898 it was the turn of Coleridge-Taylor’s Ballade in A minor. A melodic piece, with echoes of the great Romantics Tchaikovsky and Dvorak, the Ballade furthered the composer’s reputation, and reinforced his confidence for his next composition and his greatest success, Hiawatha’s Wedding Feast, based on the poem by Henry Longfellow. Novello & Co. published the score in advance of the performance, and various luminaries committed themselves to attend. Sir Arthur Sullivan, although not far from death, insisted – “I’m always an ill man now, my boy, but I’m coming to hear your music tonight even if I have to be carried”.

Hiawatha was a breath of fresh air in a choral repertoire which was intensely serious or religious. It was secular fun, superficial and familiar exoticism, a matter of feathers and skins and colourful names, but it was at the same time a big, lovely orchestral sound buoying up the excitement of a massed bank of voices singing a melody which flowed more or less continuously. In a time when amateur choirs and sheet music were part of popular culture Hiawatha’s Wedding Feast was a score to enjoy, but it was hard act to follow, and the composer’s reputation never again reached the same heights. Listen to ‘Onaway!’ from Hiawatha’s Wedding Feast, conducted by Sir Malcolm Sargent in 1944.

The music which followed Hiawatha included the Scenes from an Everyday Romance suite (1900) and the concert overture Toussaint L’Ouverture (1901), but these were not received with the enthusiasm for which he might have hoped. In 1903 the Three Choirs Festival commissioned another choral work, The Atonement. This failed to satisfy the public, which would continue to love Hiawatha’s Wedding Feast. Coleridge-Taylor had famously sold the rights to Hiawatha for a flat fee of £25 15s. He received £250 for the two sequels, more than twice his annual income at the time of his death, but he now had a family to support and he needed to continue working.

Between 1898 and 1907 he was chief conductor of the Croydon Symphony Orchestra and resident conductor to the Westmoreland Festival, as well as the Rochester Choral Society. In 1904 he became chief conductor to the Handel Society concerts, a post he held until his death. At the same time he served as guest conductor for performances of Hiawatha (by 1904, it had been performed 200 times in England). He also lectured in Croydon, later joining Trinity College of Music (1903), Crystal Palace School of Art and Music (1905) and then the Guildhall School of Music as professor of composition.

In between jobs he acted as an adjudicator at various festivals and competitions, including the National Eisteddfod of Wales in 1900. At same time he became a frequent collaborator of the actor-manager Herbert Beerbohm Tree at His Majesty’s Theatre, and (presumably in his spare time) he also wrote other choral works, as well as pieces for strings and for piano, orchestral works, and an unpublished grand opera (Thelma, 1907-09).

It would not have been surprising if Coleridge-Taylor’s private and domestic life had suffered under the pressure of work, but there is plenty of evidence about the value he placed on his family life. The composer Havergal Brian bumped into the couple in Hanley and wrote about them as “…strikingly winsome, and with Hiawatha in mind, I pictured them as journeying to the wedding feast”. According to Havergal Brian’s account, the man himself seemed to be self-confident and at ease in his environment: “Coleridge-Taylor spoke in short, swift sentences, linked to many pleasantries. When he mounted the platform, he was confronted with seventy players of the Hallé orchestra and a chorus of eighty only. At the first entry of the chorus, he stopped suddenly and, addressing the orchestra, said rather dryly ‘Gentlemen, half marks throughout!’”.

But Coleridge-Taylor’s success and fame did not exempt him from racial harassment. Most painful was the fact that his wife Jessie was also a target of abuse. His daughter records his response to the groups of local youths who would repeatedly shower him with insulting comments about the colour of his skin: “When he saw them approaching along the street he held my hand more tightly, gripping it until it almost hurt.”

Hiawatha’s Wedding Feast can be read as a parallel for the African-American experience, and African-American audiences certainly took the work to their hearts. Twenty-Four Negro Melodies also shows the influence of Coleridge-Taylor’s friend, the African-American poet Paul Dunbar. In a revealing quotation in the preface to Twenty-Four Negro Melodies Coleridge-Taylor writes: “What Brahms has done for the Hungarian folk music, Dvorak for the Bohemian, and Grieg for the Norwegian, I have tried to do for these Negro melodies.”

Coleridge-Taylor also took a passionate interest in the issues of race, the politics of colonial freedom, and in his own African background. After reading the work of the African-American writer W.E.B. Dubois, he attended the first Pan-African conference in London in 1900 and became part of a loose circle of black activism. His name was already well known in black America. In 1901 a Samuel Coleridge-Taylor Choral Society had been founded by black singers in Washington DC. Coleridge-Taylor’s first visit three years later was a grand occasion.

The US Marines Band was engaged, and the first concert took place in Washington in front of an audience of 2,700, two thirds of them black. Two further tours of the US reinforced the composer’s reputation; and, during the 1910 tour, Coleridge-Taylor conducted exclusively white orchestras as well as African-Americans – an event without precedent. In the following year he undertook his final commission, the Violin Concerto, whose first version, on its way to the US première, went down with the Titanic. By a strange irony, the central movement was based on a spiritual entitled Keep Me From Sinking Down.

On 28 August 1912, Coleridge-Taylor collapsed at West Croydon station while waiting for a train. He died a few days later of acute pneumonia at his home in Croydon, on 1 September 1912, at the age of 37.

He was buried in Bandon Hill Cemetery, and his funeral became a major public event. A memorial concert produced £1,440 for the family, a tidy sum given that his income in the year of his death has been estimated at less than £200. The Guildhall School of Music arranged bursaries for both of his children, and they went on to become professional musicians themselves. His widow received a Civil List pension of £100, but the music world was shocked by the fact that Coleridge-Taylor and his family were not to receive any royalties from the fabulous commercial success of Hiawatha’s Wedding, and the scandal fuelled the formation of the Performing Right Society as a lobby for legislation on rights and royalties.

Hiawatha’s Wedding Feast continued to be hugely popular throughout the 1920s and 30s, but after the Second World War Coleridge-Taylor’s music seems to have disappeared from sight. He left, however, the legacy of a talent which drew on his ambiguous and difficult origins without shutting him off from the currents of his time and place. He had become, against all odds, part of his culture’s tradition, while openly declaring the mixture of elements and ideas which moved him. His ability to flourish in between cultures and to base himself at the junction of different tracks, continues to give him, and his music, the power to speak to our times.

Jamaica Past (images)
Selected images from 1800 - 1923
Previous post “These Stories Needed to Be Told”: Steve McQueen and the Golden Age of Resistance
Next post New Legal Duty for Employers and Employees Regarding Self-Isolation in England Comes Into Force