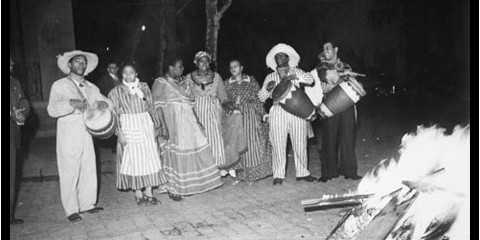 We’d like to think that it is common knowledge that anti-blackness is a global phenomenon but unfortunately, the targeted white-washing of known history has prevented that. History has been white-washed so severely that often, the extent of racism across the world is masked. The country that has been most ‘successful’ in white-washing its population, history and culture is Argentina.

Argentina is considered the whitest country in South America, which is odd considering that, like Brazil, they were colonized and subjected to Spanish colonists shipping in African slaves from the West Coast of the African continent. Currently, Argentina’s population of European ethnicity constituted 97% of the population – this is a disturbing figure taking into account that “[b]y the late 1700s nearly 50 percent of the population in the interior of the country was black, and between 30 and 40 percent of the population of Buenos Aires was black or mulatto,” reported The Root. When asked about Afro-Argentines, most Argentineans believed that Argentina never took part in the slave trade or that the Afro-Argentines left Argentina “naturally”. Both of these theories are wrong.

“Former Argentine President Carlos Menem who once declared: ‘In Argentina blacks do not exist, that is a Brazilian problem.’” – The Root

What actually happened to Black Argentineans is so disturbing and inhumane, it would be shocking that it wasn’t being taught in classrooms if the world wasn’t so inherently racist. It is widely reported that president of Argentina from 1868 to 1874, Domingo Faustino Sarmiento, undertook a ‘covert genocide’ that wiped out the Afro-Argentinean population to the point that by 1875, there were so little Black people left in Argentina that the government didn’t even bother registering African-descendants in the national census.

“On a broader scale, the ‘elimination’ of blacks from the country’s history and consciousness reflected the long-cherished desire of successive Argentine governments to imagine the country as an ‘all-white’ extension of Western Europe in Latin America.” – The Root

During his term, Sarmiento instituted highly oppressive and deadly policies to eradicate Black people. He segregated the Black community from European descendants, placing them in squalor with no descent infrastructure and healthcare. This became a death sentence when cholera and yellow-fever outbreaks ravaged this community with no adequate measures to prevent or treat the illnesses. Sarmiento’s genocide also constituted, “the forced recruitment of Afro-Argentines into the military, mass imprisonment for minor or fabricated crimes, and mass executions.” Sarmiento also enlisted Afro-Argentinean men in the army to fight the Paraguayan War of 1864. Allegedly, Sarmiento knew that Argentina wouldn’t fare well in the war, sending thousands of Afro-Argentine men to their deaths. The war impacted the gender balance so severely that Afro-Argentine women were “forced” to have children with white or mixed Argentinean men.

Tellingly, Sarmiento wrote in his diary in 1848: “In the United States… 4 million are black, and within 20 years will be 8 [million]…. What is [to be] done with such blacks, hated by the white race? Slavery is a parasite that the vegetation of English colonization has left attached to leafy tree of freedom,” – International Business Times

The endeavor was pushed by Argentinean leaders and intellectuals, who wanted to erase the Afro-Argentine presence from all parts of Argentinean life, including culture. The Tango is Argentina’s most prized cultural export but according to early art relating to the dance, it has African origins through the influence of Black Argentineans. The Tango has deep roots in the former African kingdom of Kongo and is currently considered one of the world’s most beautiful dance forms. Legendary white Tango dancer Carlos Gardel actually had Black composer and poet, Gabino Ezieza as his tutor, which shows an Argentinean dedication to not associating the Tango with any form of blackness.

“The Kikongo word for sun is ntangu”, Thompson writes, and the movements of the ntangu through the sky inspired dance forms on Earth that were eventually Creolized with Spanish and Italian influences in Buenos Aires as tango, which means, literally, “‘moving in time to a beat.’ ” – The Root

Across the world, movements have erupted to fight back against the systematic erasure of black humanity so seeing a country actually succeed in removing blackness from its identity is chilling. It seems every day, Black people are finding just how much we are hated just for being ourselves and on top of that, we have to deal with living a world that would let something like this happen with little to no international outrage. The amnesia that Argentineans enjoy has led to comments like “Argentina has no black people, so we can’t be racist” but I think we have to contend with another country on earth that might rival America as a hostile place for black bodies.

To watch a BBC video on being Black and Argentine, click the following link: https://www.bbc.co.uk/news/av/world-latin-america-46641620

Jamaica Past (images)
Selected images from 1800 - 1923
Previous post QUAI BRANLY MUSEUM
Next post “These Stories Needed to Be Told”: Steve McQueen and the Golden Age of Resistance