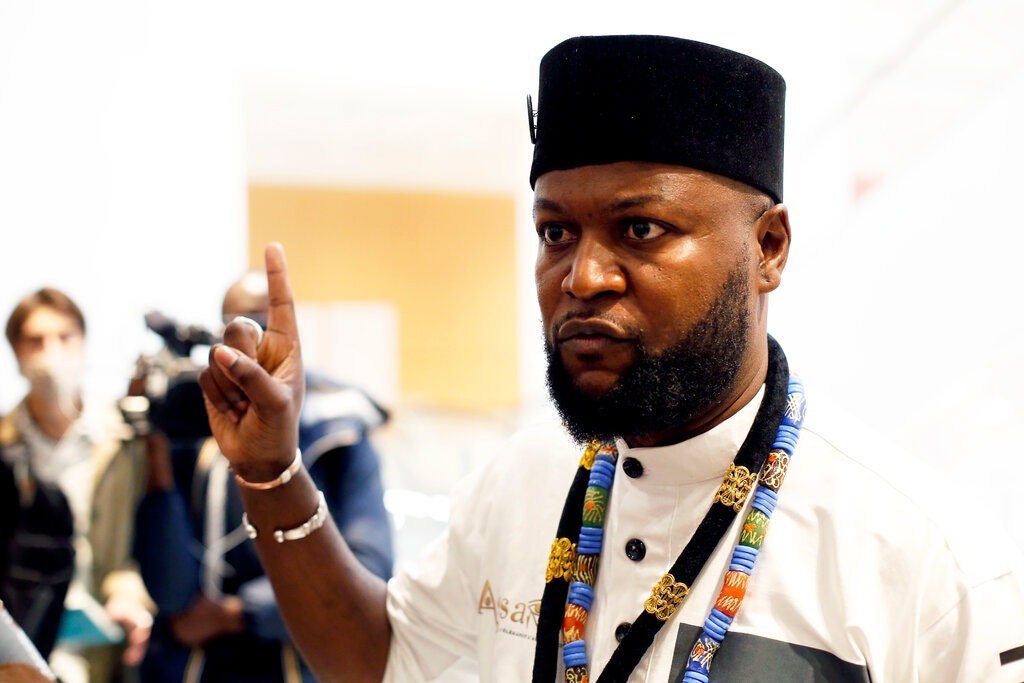 PARIS — Wearing a long, white tunic with the names of two African ethnic groups written on it, the defendant stepped forward to the bar, took a breath, and launched into a plea.

“No one has sought to find out what harm has been done to Africa,” said the defendant, Mwazulu Diyabanza, a Congo-born 41-year-old activist

and spokesman for a Pan-African movement that denounces colonialism and cultural expropriation.

Mr. Diyabanza, along with four associates, stood accused of attempting to steal a 19th-century African funeral pole from the Quai Branly Museum in Paris in mid-June, as part of an action to protest colonial-era cultural theft and seek reparations.

The presiding judge in charge of the case acknowledged the two trials: One, judging the group, four men and a woman, on a charge of attempted theft for which they could face up to 10 years in prison and fines of about $173,000.

“And another trial, that of the history of Europe, of France with Africa, the trial of colonialism, the trial of the misappropriation of the cultural heritage of nations,” the judge told the court, adding that such was a “citizen’s trial, not a judicial one.”

The political and historical ramifications were hard to avoid.

Unlike in Germany, where this debate has been welcomed by both the government and museums, France has struggled to offer a consistent response, just as the country is facing a difficult reckoning with its past.

“Our act aimed to erase the acts of indignity and disrespect of those who plundered our homes,” Mr. Diyabanza said.

The restitution debate came to a head in France when President Emmanuel Macron promised in 2017 to give back much of Africa’s heritage held by French museums. He later commissioned a report that identified about two-thirds of the 70,000 objects at the Quai Branly Museum as qualifying for restitution.

But in the two years following the report, only 27 restitutions have been announced and only one object, a traditional sword, has been returned — to Senegal, in November 2019. The remaining 26 treasures that were designated for restitution, to Benin, are still in the Quai Branly Museum.

And the bill supporting these exceptional, or case-by-case, restitutions has yet to be voted on.

Calvin Job, the lawyer for three of the defendants, said in court that the bill, by focusing on exceptional rather than regular restitutions, reflected “a desire not to settle the issue.”

“We should enshrine the principle of restitution in the code of law,” Mr. Job said.

Given what they perceive as hurdles, activists from Mr. Diyabanza’s Pan-African movement have staged operations similar to that in Paris at African art museums in the Southern French city of Marseille and in Berg en Dal, in the Netherlands.

At times, these actions have epitomized growing identity-related claims, coming from French citizens of African descent living in a country where a racial awakening has started to take place in recent months.

“We have young people who have an identity problem,” Mr. Job said in an interview, “who, faced with a lack of action, a lack of political will, have found it legitimate to do the work that others don’t.”

Marie-Cécile Zinsou, the president of the Zinsou Art Foundation in Benin and the daughter of a former prime minister of Benin, said that, although she did not share the activists’ methods, she understands “why they exist.” “We cannot be ignored and looked upon down all the time,” she said.

Such grievances on France’s post-colonial legacy were in full play on Wednesday at the trial as a small crowd of about 50 people, most Pan-African movement activists, were barred from entering the courtroom by the police because of concerns about the coronavirus and because some feared that their presence could disrupt the trial.

Activists shouted “band of thieves” and “slavers” at the police officers cordoning off the entrance to the courtroom and they chanted, “Give us back our artwork!”

Activists in front of the courtroom on Wednesday welcomed the recommended sentences, which they found modest, as a collective victory.

“We all are defendants here; all of us should normally be at the stand today,” said Laetitia Babin, a 45-year-old social worker born in Congo, who had arrived from Belgium in the morning to attend the trial.

“It’s not up to them to decide how artworks are returned to us, it’s up to us,” she said.