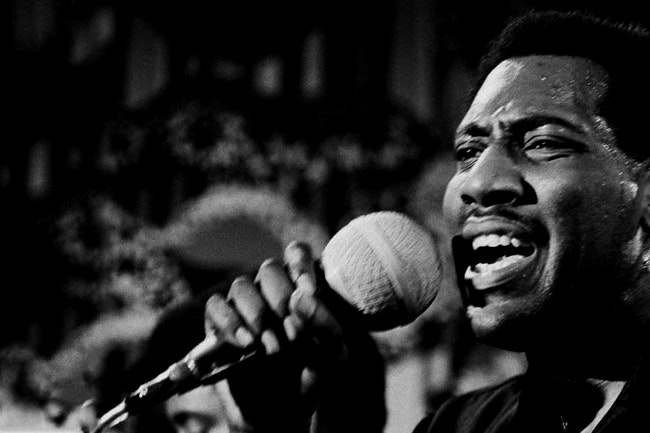 Born in Georgia, USA , on 9 September, 1941, Otis Redding, Jr. and his family moved to Macon when he was two years old. At an early age, he began his career as a singer and musician in the choir of the Vineville Baptist Church. He attended Ballard Hudson High School and participated in the school band. As a teenager, he began to compete in the Douglass Theatre talent shows for the five-dollar prize. After winning 15 times straight, Otis was no longer allowed to compete.

Otis joined Johnny Jenkins and the Pinetoppers in 1958, and would also sing at the “Teenage Party” talent shows sponsored by local celebrity disc jockey King Bee, Hamp Swain, on Saturday mornings initially at the Roxy Theater and later at the Douglass Theatre in Macon.

Otis drove Johnny Jenkins to Memphis, Tenn., for a recording session in August 1962 at Stax Records. At the end of the session, Stax co-owner Jim Stewart allowed Otis to cut a couple of songs with the remaining studio time. The result was “These Arms Of Mine”, released in 1962. This was the first of many hit singles (including classics “I’ve Been Loving You Too Long”, “respect” and “Try A Little Tenderness”) that Redding enjoyed during his tragically short career. After nine months, he was invited to perform at the Apollo Theatre for a live recording and would go on to showcase his dance movements with “Shake” and “Satisfaction.”

After years of ambition and drive, Otis Redding’s sacrifices paid off. He appeared throughout the United States, Canada, Europe, and the Caribbean. His concert tours were among the biggest box office smashes of any touring performer during his time. He was nominated in three categories by the National Academy of Recording Arts & Sciences (NARAS) for recordings he made during 1967. 1968 was destined to be the greatest year of his career with appearances slated at such locations at New York’s Philharmonic Hall and Washington’s Constitution Hall. Redding was booked for several major television network appearances including The Ed Sullivan Show and The Smothers Brothers Show. He was posthumously inducted into the Georgia Music Hall of Fame in 1981 and the Rock & Roll Hall of Fame in 1989. In 1999, he was recognized with a Lifetime Achievement Grammy Award.

In 1970, Warner Brothers released an album of live recordings from the June 1967 Monterey International Pop Festival, featuring Otis Redding on one side, and Jimi Hendrix on the other. This record is evidence that the hip white audiences, better known as the “love crowd”, were digging Otis Redding just as much as the black audiences for whom he had always played. His energy and excitement, his showmanship, and his relationship with the crowd made Redding a master as a performer who had the rare gift of being able to reach audiences the world over.

It was unlike anything Redding had ever written, influenced by his admiration for the Beatles’ classic “Sgt. Pepper’s Lonely Hearts Club Band” album. Otis played The Beatles’ album constantly during a week he had spent on a houseboat in Sausalito when performing at San Francisco’s Basin Street West in August 1967. Just sitting’ on the dock, looking out at the bay, it’s easy to see where Otis got the inspiration for the song, “(Sittin’ On) The Dock Of The Bay”.

It had a lilt, memorable hook, and a great story. While it was typical of Redding’s previous recordings, it signaled his creative expansion as a writer and artist. That song became Otis Redding’s biggest worldwide hit and signature. This was Otis’ final recording before the plane crash that took his life in December 1967. In September 1987, Atlantic Records released “The Otis Redding Story”, a two volume record set featuring Otis’ most unique and rare hits, such as “I’ve Been Loving You Too Long.” “Respect,” “Pain In My Heart,” “Satisfaction” and of course “(Sittin’ On) The Dock Of The Bay.”

Above all, Otis was a family man. He met his wife, Zelma Atwood, in 1959 and they married in August 1961. Together they have three children: Dexter, Karla, Otis III, and Demetria, who was adopted after Otis’ death. His family was close to his heart and soul. In 1965, he moved them into a spacious 300-acre property, “The Big O Ranch” in Round Oak, Ga., affectionately named after “The Big O” himself.

Zelma has carried on as the family matriarch and continued to rear their children to successful adulthood in honor of her late husband. Sons, Dexter and Otis, III. are active music producers and songwriters, both traveling internationally. Dexter, who resides in Jacksonville, FL also is co-manager in two food franchise operations. Karla is a successful and influential entrepreneur having founded and formerly managed Karla’s Shoe Boutique with her mother and partner, in downtown Macon for almost 20 years. Today, she is the executive director of the Otis Redding Foundation, established in memory of her father. Zelma is the executrix over the Redding Estate where she, along with Karla, manages daily requests for songs in commercials, music sampling, the use of Otis’ name and image, the Otis Redding Memorial Fund and the Scholarship Foundation. Demetria is in public health administration.

As president of Redwal Music Co., Inc., Otis was very active in the company’s operation and was directly responsible for the company’s leadership in the music publishing field. To date, the company has copyrighted over 200 commercially successful songs and published many songs that have sold in excess of one million copies each.

The idea that music could be a universal force, bringing together different races and cultures, was central to Otis’ personal philosophy and reflected in his everyday life. At a time when it may not have been considered politically correct, Redding had a white manager, Phil Walden, and a racially mixed band. He took care of business, setting up his own publishing and record label, Jotis Records, making unprecedented moves for a black music artist in the ’60s. While it was not Otis’ prime motivation, he was seen as a role model by blacks. He was someone who got paid and paid well without the usual horror stories of being ripped off by promoters, agents, managers, or record company executives.

Otis Redding’s prowess as a businessman led him to form his own label, Jotis records, in 1965. In addition to his many business interests in fields related to music, he was engaged in other business interests in his native state such as real estate, investments, stocks, and bonds. His business acumen meant that Otis knew how to earn and invest his money, unlike some of the other soul artists of the ’60s. In addition to the 300-acre Big-O Ranch, complete with a three-story home, livestock and a three and a half acre lake with fish, Redding acquired two private planes. It was his twin-engine Beechcraft that he was riding on that tragic day, December 10, 1967 when it crashed into Lake Monona in Madison Wis. The world lost a great musician and a great man on that day.

His music and his legacy, however, lives on.