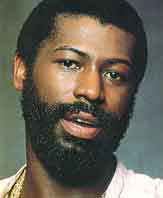 Theodore DeReese Pendergrass was born in Philadelphia, USA on March 26, 1950 and was an American singer. Born to a poor single mother, he barely knew his father, who was killed when Pendergrass was 12. He came of age as the city was finding its own soul sound – a silkier alternative to rivals such as Motown, bridging the gap between funk and disco. Philly soul became a phenomenon, largely powered by songwriting-production duo Kenny Gamble and Leon Huff, who churned out hits not only for Melvin but also the O’Jays, the Three Degrees, Patti LaBelle, Billy Paul, Lou Rawls and more. Having started out as the Blue Notes’ drummer, Pendergrass was quickly promoted on the strength of his voice and became the scene’s biggest star. “You gotta give a voice like that some raw meat,” as Gamble puts it. “We really had to dig deep into our souls to come up with songs that he was gonna be able to execute.”

Teddy rose to fame with Harold Melvin & The Blue Notes, before gaining even greater success as a solo singer.

Aged 27, in 1977, Teddy released his first solo album, Teddy Pendergrass. It was well received and featured the upbeat “disco” track, You Can’t Hide From Yourself:

As well as the velvety smooth classic songs that he would become renowned for:

He followed Teddy Pendergrass up with Life is a Song Worth Singing, which yielded the hit, Close The Door:

The album reached No.1 in the US R & B chart and received an American Music Award nomination. It also featured the rare groove favourite, When Somebody Loves You Back:

1979 saw the release of two albums. The first, Teddy, included the song Turn Off The Lights, which reached No. 2 in the US R&B chart:

The second was the live album, Live! Coast to Coast. 1980 saw the release of the album, TP, with another hit slow tune, Love TKO:

The song would be sampled 14 years later by Ahmad for his hit song, Back in the Day. By now Teddy’s popularity as an artist was the highest it had ever been. All 5 of his albums had gone platinum and all his concerts were sold out. However in March 1982, the car that Teddy was driving was involved in a collision and although he survived, he was left paralysed from the waist at the age of 31.

It would be 4 years before Teddy released a album and that comeback album was called Joy. The single of the same name brought him a No.1 hit:

as well as another classic slow song, 2 a.m.:

Teddy announced his retirement in 2006 and joined the ancestors on January 13, 2010.

Here is Teddy in his own words:

For those of you who know me, and for those who do not…. Let me tell you about who I am and why I am here.

I was born and raised in Philadelphia, Pa. I was given the opportunity to sing my first song in church at 2 ½ years old, and I did.

In grade school, I was given the opportunity to join the now world famous, Philadelphia Boys Choir, and I did.

In Jr High, I was given the opportunity to join the All City School Choir, and I did.

At 13, I saw a set of drums on the stage of the place where my Mother washed dishes and scrubbed floors. I took the opportunity to teach myself how to play.

At 18, while working as a waiter in an Atlantic City nightclub, I was given the opportunity to audition for a job playing drums with a band and travel. I did, and I got the job.

A year later, I was offered an opportunity to play drums for a singing group named the Blue Notes, and I did.

A year later, I was given the opportunity to become their lead singer, and yes, I did.

A year later, we signed a recording contract, and the named changed to Harold Melvin and the Blue Notes. We had immediate success with songs like “If you don’t know me by now, The Love I lost and Wake up everybody.”

In 1975, unsatisfied with my situation, and after much thought, I decided to take a huge risk and strike out on my own. So, with no money, I left the Blue Notes.

A year later, I signed a solo recording contract, and as they say, the rest is history.

I quickly surpassed all previous record sales by any black artist, sold out national and international concerts, owned estates, cars, my own private jet and oh yes, let’s not forget my “For Woman Only” concerts. I HAD IT ALL!

In 1982 and at the height of my career, I had an automobile accident. I WAS DEVASTATED!

I had no idea what to do or where to turn.

After being pushed aside and in despair, unexpectedly and thankfully, in ‘83, another golden and much-needed opportunity came my way. Not knowing whether I could, or would succeed, I was offered another recording contract.

In 1984 and against all odds, I released the album “Love Language” which spawned the duet “Hold me in your arms” featuring a then young and unknown 18 year old singer named Whitney Houston. In fact, that was her first record. Ladies and Gentlemen, that album to date has sold over 2 million copies.

I went on to record six additional and successful albums; made videos, performed at 85 Live Aid, made numerous TV appearances, and accepted Grammy nominations. As we all know, Miss Houston has done extremely well. Actually, she has sold waaaaaaay more records then I have.

I am also a published author.

The point here is “OPPORTUNITY…..and CHALLENGE”! Be challenged, challenge those around you…. because CHALLENGE creates amazing results…… BELIEVE ME. I KNOW!