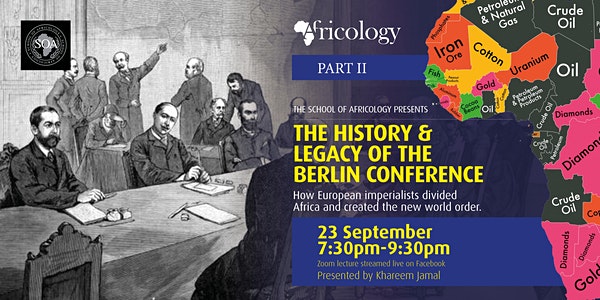 This follow up to the first lecture on the Berlin Conference , focuses on the repercussions or fallout of that meeting of the 14 nations.

The repercussions of the Berlin Conference in 1884/85, can be felt today.

The legacy of that meeting of the 14 nations to effectively decide the future of Africa and its resources, both human and mineral, has relegated African people the world over to the bottom of the league of prosperity.

At the same time, those European nations who were the beneficiaries of the “scramble for Africa”, have gorged themselves on what King Leopold called “this magnificent African cake” enriching individuals and state alike.

In this lecture we will look at the subsequent fight for independence of those countries created by the colonial policies of “the fourteen” and the continuing struggle for economic empowerment those nations still face today.

Ultimately the question is what is the price Africa and her people have had to pay and continue to pay because of the avaricious lust for gold, diamonds, land, oil of those European nations who redesigned the map of Africa.

CHERRY NATURAL (JAMAICA) SPOKEN WORD
Cherry Natural considers herself as a feminist dub poet or activist, and her sources of inspiration include the late Jamaican poet Louise Bennett. Louise Bennett is well-known as the first Caribbean poet who used Creole or patois consistently and to great effect in her ballads, and who relentlessly stood up for the people's language as opposed to standard English which was then considered as the only passport to social elevation.
Previous post 26.09.2020: EMANCIPATING THE BLACK MIND FROM HISTORICAL TRAUMA, ONLINE EVENT
Next post Bla3k2Base6 Radio Show