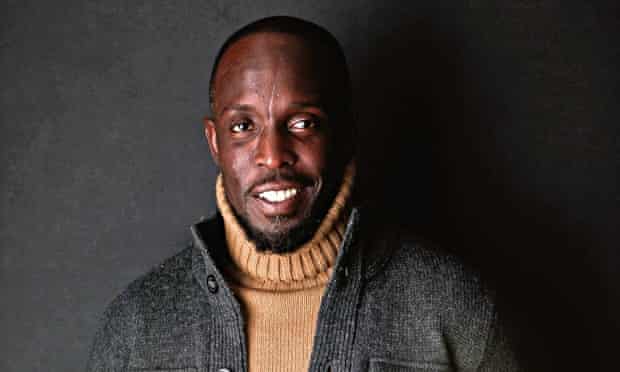 “I still stop and pinch myself,” he says in the slow, raspy drawl that’s become his signature. “I just thank God, because things could have been way different for me.”

Michael K. Williams, born November 22, 1966 in Flatbush, Brooklyn, New York, USA, is an actor.  The youngest of 10 children, he says he rarely envisioned a life beyond Brooklyn. His mother, an immigrant from the Bahamas, worked as a seamstress for much of her life before opening a small day care center that she ran out of Vanderveer, a collection of red-brick buildings that stretches across 30 acres along Foster Avenue in the middle of Brooklyn.His father, who came from South Carolina, was a gregarious but wayward man who battled health problems.

Starved of opportunities, many in the community took their cues from local gangsters, who exuded a swaggering masculinity that Mr. Williams contorted himself to realize.As a boy, he was sexually molested and the experience left him withdrawn and confused about his own sexuality. He never spoke of the abuse back then, but his peers seized on his vulnerability and tormented him relentlessly. “They had two nicknames for me: Blackie and Faggot Mike,” Mr. Williams said. “I was very soft, very fragile.” Though formal acting was not yet on the horizon, his life became a kind of delicate performance as he desperately tried to conform. He wore knockoff streetwear and learned to walk with a lean.

Dancing, acting and how he got that scar

He became a successful dancer in the 1990s, working with the likes of George Michael and Madonna before switching to acting, having being encouraged to do so by rapper Tupac Shakur. But that all came to an end when he got his scar. It turns out the scar is a lasting memento from a New York street fight reminiscent of something we might’ve seen in the series that made the actor famous.One night at a bar in Queens, on the eve of his 25th birthday, he stepped outside to find a group of men jumping his friend. When he tried to intervene, one of the muggers pulled out a razor blade and sliced him across his face and neck. “The dude wiped his hand across his mouth and … smacked me. What he did was, he spit a razor. He was positioning the razor in his mouth to get it between his middle finger and ring finger. And then he swiped me down my face. The cut on my face was actually the first hit of the fight, so we managed to escape with our lives, barely, that night”  One gash went straight through his jugular. The next day, his mother took out a second insurance policy on his life. “She told me I’d never live to 30,” Mr. Williams recalled, “and I believed her.” But the attack that almost killed him left an indelible mark that also revived his life: a scar trailing diagonally down his face, from the top of his forehead to the middle of his right cheek. It was impossible to ignore. And it radically transformed his image. No one wanted him as a dancer anymore in their music videos, that scar was more suited to the streets than a high-budget music video.

“The dude wiped his hand across his mouth and … smacked me. What he did was, he spit a razor. He was positioning the razor in his mouth to get it between his middle finger and ring finger. And then he swiped me down my face. The cut on my face was actually the first hit of the fight, so we managed to escape with our lives, barely, that night”

Michael got some bit parts – in The Sopranos and in R Kelly’s rap opera Trapped in the Closet – before landing his big break, the role of Omar Little in The Wire. His portrayal of a gay, shotgun-toting “hood Robin Hood”, who stole from dealers to give to the poor, brought international attention and a cult following in some unlikely places. He was Barack Obama’s favourite character.

The Wire, Boardwalk Empire and addiction

The actor didn’t fully break through until that scar (coupled with William’s raw talent) caught the attention of David Simon, who took a risk on the relatively unknown actor when casting his masterful crime saga The Wire.  Williams paid back the risk with one of the great television performances of the 20th Century.

“When the President of the United States said that was his favorite character, that kind of freaked me out a little bit. I realized, yeah, this character is taking on a life of its own. But for me it started becoming less about Omar and more about David Simon’s message of the show as a whole, what The Wire represented. The longer that show went on, the less I cared about Omar in that sense of Omar’s importance. I became grateful of being a small part of this story and all the pieces were just as valid and they mattered. As the show moved on it became more about that than Omar’s importance.”

But he struggled to adjust to normal life after shooting The Wire. He got used to being called Omar in the street, began experimenting with cocaine, and was evicted from his Brooklyn housing project after his money from the first series dried up. His life started to resemble something from the show: the lines between reality and what he was portraying on the streets of Baltimore became increasingly blurred.

Michael has credited Barack Obama with pulling him out of his downward spiral in the spring of 2008, after The Wire ended. In the middle of a three-day cocaine bender, he accompanied his mother to a rally for the future president in Harrisburg, Pennsylvania. By then, Obama had publicly declared Omar his favorite character on the series. According to The New York Times, “when the two men met privately after the event, Mr. Williams, lock-jawed and high on cocaine, could barely speak.” “Hearing my name come out of his mouth woke me up,” he told the Times. “I realized that my work could actually make a difference.” He got clean and took on the role of Chalky White, the conflicted patriarch of the black community in Boardwalk Empire. Smaller roles in The Road and 12 Years A Slave followed, as well as a part as black panther Tariq Khalil in Inherent Vice.

“Addiction doesn’t go away,” he said. “It’s an everyday struggle for me, but I’m fighting.”

He feels that his identity crisis peaked at the end of filming his final scene as Omar, when he looked in the mirror and didn’t know who was looking back. “Omar is this dark-skinned outspoken man in the hood who didn’t care what anyone thought of him,” Mr. Williams said. “He is everything I wished I could be.” But “I was in a different place in life, then. I was using Omar as a means of escape. Now I don’t use my job as a way to define me: it’s what I do, not who I am. I have that understanding now.”

Michael has always made his performances deeply personal, returning to the darkness he experienced growing up in the public housing projects of East Flatbush, Brooklyn. Though agonizing, those memories are filled with textures he summons to elevate his characters beyond what is written, making The Wire’s Omar Little and Boardwalk Empire’s Chalky White beloved and memorable years after their final scenes.

The roles he plays

His characters aren’t easily pigeonholed: they’re gangsters with hearts of gold; rappers who take limos to claim welfare, followed by MTV camera crews; drug-dealers with a penchant for tennis; loan sharks who want to grow avocados. Being able to bring nuance and humanity to what might otherwise be 2D roles is something Williams relishes. “I use my job to engage empathy and compassion for people society might stereotype or ostricise,” he says. “No one wakes up and says ‘I’m going to become a drug-dealer’ or ‘I’m going to become a stick-up kid’. No. There is a series of events that makes them feel this is the only way out. As a black man growing up in the hood, I bear witness to some of those events.”

Of his own life, he says, “I could have been Eric Garner, I could have been Michael Brown or Trayvon Martin. My goal is to end mass incarceration and to have more dialogue about how can we stop the government filling up jails with low-level, non-violent drug offenders and people with mental illnesses or addictions. Those are health issues, not criminal ones.”

Being considered a role model isn’t something Williams is comfortable with, however. He’d rather be viewed like everyone else, someone who protests or joins in with a hashtag. “I don’t do it because I’m an actor and I need to use my platform,” he says. “No. If I was Joe the plumber or Vincent the handyman, I would still find some way. It’s just about getting out there and being in the march or on social media. It all matters.”

You know, I never liked the term “role model” for me. I don’t feel I deserve that title. I look to people like Malcolm X and Martin Luther King and the Honorable Elijah Muhammad, but I try to do my part. It’s important to me to let the youth know in my community that it’s still okay to dream. That’s it’s still okay to have hope. Right now I’m wearing a T-shirt that says “I Can’t Breathe.” It’s okay to have a voice. We matter. It’s okay to speak up. That’s the role I play right now in my community. That’s why the characters I play are so dear to me because I feel like they are a voice to my community and what is really going on in this particular time in the hood. But I don’t want to sit here and tell kids, “Look at me, I became an actor, you can, too.” It’s not about that. It’s that it’s okay to dream. It’s okay to have dreams and aspirations and hope. You can’t give up hope. It’s okay to get an education. It’s cool. So I try to make myself as tangible as possible and not have the trappings of my job alienate me from my community. I still go around the way. I still walk the streets. One time I heard Jesse Jackson say, “The trick is not leaving, the trick is being welcomed back.” For me that’s always been important. When I go back to my hood in Brooklyn in Flatbush, people come up to me and give me well wishes and they stop and they talk and it’s not about “I saw your movie,” it’s “Mike, God bless you, keep doing what you do, we’re rooting for you.” That to me is the big trick.

CHERRY NATURAL (JAMAICA) SPOKEN WORD
Cherry Natural considers herself as a feminist dub poet or activist, and her sources of inspiration include the late Jamaican poet Louise Bennett. Louise Bennett is well-known as the first Caribbean poet who used Creole or patois consistently and to great effect in her ballads, and who relentlessly stood up for the people's language as opposed to standard English which was then considered as the only passport to social elevation.
Previous post SARA BAARTMAN
Next post BARBADOS TO DASH WEH ELIZABETH AS HEAD OF STATE