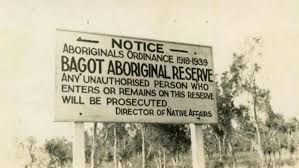 The newsletters published by the Aborigines’ Inland Mission, AIM and Evangel, are just one example of the propaganda created to control mainly Aboriginal people when they were either forced or moved to live on missions and reserves. Publications of this type were not limited to evangelical or even to religious organisations, they were also widespread through all levels of governments as well as at a community level.

The readership between the AIM and Evangel newsletters differed greatly. AIM was targeted towards evangelical Europeans living in Australia, promoting the Aborigines’ Inland Mission’s work within mainly Aboriginal communities. Evangel was written directly to mainly Aboriginal people to promote the benefits of an evangelical Christian belief system.

The history of Australia’s various state protection laws, and the history of the Aborigines’ Inland Mission, begins in London in 1837, when a Parliamentary Select Committee presented a Report on Aboriginal Tribes to the House of Commons, Parliament.

The Report on Aboriginal Tribes presented findings on the wellbeing of all Indigenous peoples in British colonies, and included chapters on New Holland (Australia) and Van Diemen’s Land (Tasmania). The Suggestions chapter recommended that:

“It appears that not a single native now remains on Van Diemen’s Land. Thus nearly, has the event been accomplished

which was thus predicted and deprecated by Sir G. Murray “The great decrease which has of late years taken place in the amount of the Aboriginal population, render it not unreasonable to apprehend that the whole race of these people may, at no distant period, become extinct. But with whatever feelings such an event may be looked forward to by those of the settlers who have been suffered by the collisions which have taken place, it is impossible not to contemplate such a result of our occupation of the island as one very difficult to be reconciled with feelings of humanity, or even with principles of justice and sound policy;

and with the adoption of any line of conduct, having for its avowed, or for its secret object, the extinction of the Native race, could not fail to leave an indelible stain upon the character of the British Government.”
– Van Diemen’s Land, Report of the Parliamentary Select Committee on Aboriginal Tribes, House of Commons, Parliament, Great BritaIn, 1837

Not long after the British began establishing colonies in Australia, there were growing concerns in some parts of the community about the fate of Aboriginal people who, it was assumed, were dying out. From the late 1700s, Aboriginal reserves were created as a political response to the dispossession of Aboriginal people from their land.

The first attempt to control the ‘dying’ population came with the creation of the Aboriginal Protectorate under George Augustus Robinson on Bruny Island in Tasmania in 1829. This scheme inspired Aboriginal protectors in different regions to liaise between the settlers and the Aboriginal population.

The NSW Aboriginal Protection Board was created in 1883 to look after the welfare of Aboriginal people and provide grants of land for them to live on. This represented a new phase of control over Aboriginal people’s lives in NSW. The appointment of the protector and his recommendations for reserves were influenced by the high visibility of Aboriginal people living and camping at Circular Quay and La Perouse, close to Sydney.

The Act also gave the NSW Aboriginal Protection Board the power to remove Aboriginal people from reserves, and from camping ‘within or near any reserve, town or township’. Admission to the reserves was based on the appearance of Aboriginality.

The Aboriginals Ordinance 1911 placed Aborigines in the Northern Territory under the direction of a Protector who under section 3 (1) of the Act was given power to ‘undertake the care, custody, or control of any aboriginal or half-caste’, and, the Aborigines Act (SA) 1911 similarly provided for the ‘protection’ of Aboriginal people.

“The Census and Statistics Act 1905 established the Australian Government Bureau of Census and Statistics. The act made no reference to Aboriginal people, but the bureau needed to define ‘aboriginal natives’ when census taking. The Attorney-General gave the opinion that ‘half-castes are not Aboriginal within the meaning of section 127 of the Australian Constitution, and should therefore be included’.

For the first Australian Government census held in 1911, the interpretation of ‘shall not be counted’ as well as the decision as to who was a ‘half-caste’ was left to the bureau.”

Broadly speaking, there were three types of spaces formally set aside by the government specifically for Aboriginal people to live on:

The Aborigines’ Inland Mission (AIM) was an evangelical Christian mission which began in 1905. AIM’s first location was in Singleton, New South Wales (NSW), but missionaries quickly established locations close to many Aboriginal reserves across Australia.

AIM avoided involvement in institutions that took children from their parents. AIM’s sole concern was salvation, and helping those ‘eager to read God’s word’ to learn to read – not to ‘civilize the native’.

AIM’s action in NSW was distinctive because its missionaries were mostly female. AIM’s missionaries were sent to live by themselves among people who had settled in reserves and maintained as much as possible a sense of community.

Why were Aboriginal people moved into reserves or missions?

Over time, the creation of reserves or similar parcels of land were driven by different philosophies and initiated by different groups – churches, government, non-Aboriginal residents of towns or Aboriginal people themselves.

Though many Aboriginal people had little choice but to live on the reserves or in missions, they often developed very deep attachments to them and to the areas adjacent to the reserves.

Many other Aboriginal people did not live on Aboriginal missions, reserves or stations, but in towns, or in fringe camps on private property or on the outskirts of towns, on beaches and riverbanks mostly in extreme poor living conditions. Over time, many of these places across Australia became important to Aboriginal people.

Aboriginal people in Arnhem Land were enlisted to make up a special reconnaissance unit in the defence of Australia, after Darwin was bombed by the Japanese in 1942. Northern Territory Aboriginal missions were evacuated, with women and children transferred to Victoria, South Australia or New South Wales, with some of them never to return.