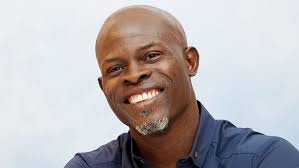 “America has this understanding of Africans that plays like National Geographic: a bunch of Negroes with loincloths running around the plain fields of Africa chasing gazelles. Meanwhile, we have Africans and African-Americans, contemporary men, with great stories, great integrity, great heroes and nobody wants to see or hear about those African heroes and those African-American heroes. One day, I will be in a position to play those great human beings on-screen.”

Djimon Gaston Hounsou is an actor and model who was born on 24 April, 1964 in Cotonou, Benin, in west Africa, to Ibertine and Pierre Hounsou. He migrated to Lyon in France at the age of 13 with his brother, Edmond. In 1987, he became a model and established a career in Paris, working with Thierry Mugler among others. He moved to the U.S. in 1990.

On arrival in the US, Djimon started his acting career. His film debut was in the 1990 Sandra Bernhard film Without You I’m Nothing, and he had television parts on Beverly Hills 90210 and ER and a guest starring role on Alias, but received a larger role in the science fiction film Stargate. He also appeared in Janet Jackson and Paula Abdul’s music videos and a series of television adverts, but came to international attention in Stephen Spielberg’s 1997 film Amistad, an historical drama based on true events aboard a slave ship, La Amistad, and a battle for freedom in the courts, initiated by Djimon’s character Joseph Cinque. He received a Golden Globe nomination for this performance.

Ridley Scott’s Gladiator, released in 2000, would see Djimon reach an even higher profile in his role of Juba, a Numidian tribesman who was taken from his home and family by slave traders. He becomes Maximus’s closest ally and friend, and inspires Maximus to bring down Commodus for the greater good.

Djimon was nominated for two Academy Awards, for In America (2002) and for Blood Diamond (2006), when he was nominated for Best Supporting Actor in respect of both movies. He has also starred in two Marvel movies, Guardians of the Galaxy (2014) and Captain Marvel (2019) and continues to be active on both the large and small screens.

He has expressed an interest in returning to Benin and making a movie in the country of his birth:

“Yes, I would go back to Benin. I have a story idea that has to do with one of our Kings interestingly enough. There is a story that I’m trying to put together, that comes from the Kingdom of Dahomey. There was a twin, and his twin was a girl, but that is unheard of in the Kingdom to have a King with a girl twin. But, in our cultural traditions, twins are revered beings; precious beings. So, when we dressed one a certain way, we dress the other one exactly alike, without regard for gender. Now the King perished at war, and they tried to hide what happened, so they dress his sister as him.”

“It’s a huge undertaking, and obviously I want to deliver an amazing film. But you have to have a personality for it, and you also have to be catered to. It takes a village to make a movie. You have to have all the right moving parts too. You have to do what’s necessary financially and have the power to go along with that. You also have to have a profound story. So, maybe it would be fun to direct, but I’m not seeing the fun so far. (Laughing) I’m tip-toeing my way there, so maybe I will direct one day. But for now, I do have stories that I could see somebody else directing. The one I saw myself directing I’ve made a structural vision for it, but it’s a huge undertaking.”

He says of his roles, that he looks for “stories that really uplift the image of the African man. Movies that uplift the integrity of the black man. We’re one of the oldest continents. We are the map to perfect DNA. We are the original people. Given the lack of education and awareness about our history, it would seem like most of our history only started from the days of colonization, or it would seem like we lack tremendous achievement as Black people. It’s definitely the reason why I’m a little bit choosy with the films [that I participate in]. I have to say that I was quite fortunate to be asked to play some of those characters.

Being in the United States I realized that I have to portray characters that reflect on my origins. Like the character that I played in Amistad—the Steven Spielberg film—and Blood Diamond, which I played for the director Edward Zwick. So those films really took me back to my origins, and made me reflect on the legacy of my people.”

In 2018, he directed a documentary, “In Search of Voodoo: Roots to Heaven”, in which he returns to Benin to explore and study the roots of Voodoo and rescue its reputation built on Hollywood movies and Christian suspicions of the religion.

He has said of the documentary:

“Well, it’s important because one of the big ailments during colonization is that European colonizers were trying to cut out our way of living. When they were transporting slaves, they were also trying to indoctrinate, so they obviously don’t want to give them or allow them to have anything that uplifts them, right?

That is the reason why African ways of life were demonized so much for so long. You’re kept away from having to live fully as who you are. We don’t know anything about our identity. When you are brought up in life, your education is the education of the colony. Your religion is the religion of the colony. Everything else is from the colony, so where are you as the African man or the Black man? Where are you? What defines your existence? Not much, right?

The documentary came from a need to declare that this is an important way of life for various African communities. No matter how much you demonize us, you can still see within countries of the diaspora, like Brazil, Cuba, Argentina, Jamaica, Haiti—you could see our way of living in Africa, still has relevance in the ways that they speak about Voodoo, and the ancestral way of living.”

Editor’s note: As of today’s date, the documentary is available on Amazon, both to watch and buy.