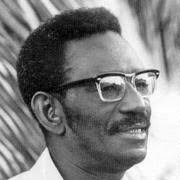 “When we say that the ancestors of the Blacks, who today live mainly in Black Africa, were the first to invent mathematics, astronomy, the calendar, sciences in general, arts, religion, agriculture, social organization, medicine, writing, technique, architecture; that they were the first to erect buildings out of 6 million tons of stone (the Great Pyramid) as architects and engineers—not simply as unskilled laborers; that they built the immense temple of Karnak, that forest of columns with its famed hypostyle hall large enough to hold Notre-Dame and its towers; that they sculpted the first colossal statues (Colossi of Memnon, etc.)—when we say all that we are merely expressing the plain unvarnished truth that no one today can refute by arguments worthy of the name.”
― Cheikh Anta Diop, The African Origin of Civilization: Myth or Reality

Cheikh Anta Diop, a modern champion of African identity, was born in Diourbel, Senegal on December 29, 1923. At the age of twenty-three, he journeyed to Paris, France to continue advanced studies in physics. Within a very short time, however, he was drawn deeper and deeper into studies relating to the African origins of humanity and civilization.

Becoming more and more active in the African student movements then demanding the independence of French colonial possessions, he became convinced that only by reexamining and restoring Africa’s distorted, maligned and obscured place in history could the physical and psychological shackles of colonialism be lifted from our Motherland and from African people dispersed globally.

His initial doctoral dissertation submitted at the University of Paris, Sorbonne in 1951, based on the premise that Egypt of the pharaohs was an African civilization–was rejected. Regardless, this dissertation was published by Presence Africaine under the title Nations Negres et Culture in 1955 and won him international acclaim.

Two additional attempts to have his doctorate granted were turned back until 1960 when he entered his defense session with an array of sociologists, anthropologists and historians and successfully carried his argument. After nearly a decade of titanic and herculean effort, Diop had finally won his Docteur es Lettres! In that same year, 1960, were published two of his other works–The Cultural Unity of Black Africa and and Precolonial Black Africa.

During his student days, Cheikh Anta Diop was an avid political activist. From 1950 to 1953 he was the Secretary-General of the Rassemblement Democratique Africain (RDA) and helped establish the first Pan-African Student Congress in Paris in 1951. He also participated in the First World Congress of Black Writers and Artists held in Paris in 1956 and the second such Congress held in Rome in 1959.

Upon returning to Senegal in 1960, Dr. Diop continued his research and established a radiocarbon laboratory in Dakar. In 1966, the First World Black Festival of Arts and Culture held in Dakar, Senegal honored Dr. Diop and Dr. W.E.B. DuBois as the scholars who exerted the greatest influence on African thought in twentieth century.

In 1974, a milestone occurred in the English-speaking world when the African Origin of Civilization: Myth or Reality was finally published.

In 1981, Diop’s last major work, Civilization or Barbarism: An Authentic Anthropology was published.

Dr. Diop was the Director of Radiocarbon Laboratory at the Fundamental Institute of Black Africa (IFAN) at the University of Dakar. He sat on numerous international scientific committees and achieved recognition as one of the leading historians, Egyptologists, linguists and anthropologists in the world. He traveled widely, lectured incessantly and was cited and quoted voluminously. He was regarded by many as the modern `pharaoh’ of African studies. Cheikh Anta Diop left us to join the ancestors in Dakar, Senegal on February 7, 1986.