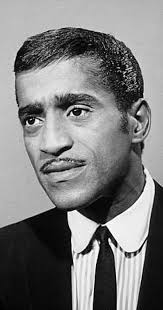 In the over hyped world of popular music music, there are legends, and then there are Legends with a capital L. There’s no doubting which category Sammy Davis Jr falls into.

For a staggering 60 years, from his debut as a four year old child star in the late 1920’s to his untimely death in 1990 at the age of 64, he more than justified his title of ‘Mr Entertainment’ and when he wasn’t inspiring headlines on stage he was making news of it, as a founder member of the Rat Pack with fellow superstars Frank Sinatra and Dean Martin.

It’s impossible in the space allotted to do more than scratch the surface of one of showbiz’s all time greats. Thankfully, Sammy Davis Jr left no fewer than three detailed accounts of life at the top. ‘Yes I Can’ (1965) and ‘Life In A Suitcase’ (1980) were followed by ‘Why Me’, published the year before his death. All are required reading.

He owed his early start to his parents, vaudeville star Sammy Davis Sr and Puerto Rican ‘Baby Sanchez, who performed with the youngsters adopted uncle, Will Mastin, in his act ‘Holiday In Dixieland’. But Sammy Jr soon became the star of the show as the newly rechristened ‘Will Mastin’s Gang, Featuring Little Sammy’ acknowledged. When the authorities forbade him to appear, so legend has it his father shrugged his shoulders, gave his son a rubber cigar and billed him as a ‘dancing midget’.

Being a star has made it possible for me to get insulted in places where the average Negro could never hope to go and get insulted.

Whatever the truth, Sammy Davis jr’s career was off to a flying start. He made his film debut in the 1932 short Rufus Jones For President, showing off the tap dancing skills taught by the legendary Bill ‘Bojangles’ Robinson. War service first brought Davis face to face with racial prejudice (‘In show business we had our own protective system’, he later remarked), but he survived to resume his career with the Will Mastin Trio (completed by his father), and while touring with Mickey Rooney in the late forties played a three week Manhattan residency with bill topper Frank Sinatra. It was the beginning of a close and lifelong friendship.

During three decades, along all the highways of my youth, Frank had always been there for me.

A near fatal car crash in 1954 en route to Los Angeles recording session saw Davis lose his left eye, but a gruelling rehabilitation schedule left little time for self-pity; he was back on stage within weeks, wisecracking about his newly acquired eye patch. That spell in hospital coincided with a religions conversion to the Jewish faith which, while sincerely held for almost the rest of his life, provided the material for yet more self-mockery of the type that endeared him to an ever growing audience.

Although Davis made his debut in 1956s Mr Wonderful, Broadway would be an occasional, enjoyable distraction from the bulk of his career. He returned in 1964 as boxer Joe Wellington in a musical adaptation of Clifford Odet’s 1937 drama Golden Boy, both shows ran for over 400 performances.

Hollywood opened new doors for all-singing, all dancing Davis, his first notable role being Sportin” Life in a 1959 version of Gershwins Porgy And Bess. If anything, he suffered through his notoriety, despite his undoubted ability, people found it difficult to accept him in character roles like the embittered jazz musician in 1966’s A Man Called Adam. More successful perhaps were Rat Pack movies like Salt And Pepper (1968) and One More Time (1970) in which he simply played himself, while a brace of Cannonball Run films in the eighties afforded screen reunions with Dean Martin and others. Then in 1988, just two years before his death, he showed he could still dance by partnering Gregory Hines in the evocative Tap.

While Davis’s success broke down racial barriers, there were inevitably cries of “sellout” notably when he endorsed Republican President Richard Nixon in 1972. (Even James Brown confided ‘You’re taking a lot of heat…I never got it this way’). Yet every black performer all the way to nineties superstars Michael Jackson and Eddie Murphy (whose TV production company funded Davis’s last movie role in The Kid Who Loved Christmas) owe him a vote of thanks for his ground breaking work both on and off camera.

‘Long before there was a civil rights movement’, he remarked in 1989, I was marching through the lobby of the Waldorf Astoria, of the Sands, the Fountainbleau, to a table at the Copa. I’d marched alone’. But it was his attitude to performance that broke barriers. Jolson had got the ball rolling, but too many taboos remained.’Dad said to me “You can’t do impersonations of a white person,” he once commented. ‘He really believed that’. Davis’s philosophy was a simple one. ‘Just do what you’re best at, he said in 1988, ‘and when you can’t do it any longer – stop’.

Sadly, the cancer that ended his life on 16th May 1990 made that decision for him, but he’d long since sung and danced his way into immortality. A final world tour in 1988/89 with Sinatra and Martin will long be remembered, even though Liza Minnelli had to take Dean’s place when ill health forced him to drop out. But Davis sang and danced on. ‘Sammy knew he was dying back then,’ Sinatra later revealed, ‘but you never expect it to come to that. We all think we’ll live forever.’

Sadly, of course, that doesn’t happen, but the magic of the music remains.

Three times married, Davis beat alcohol abuse, physical infirmity and the color bar and admitted he’d thrown away four fortunes gambling in Vegas and living the good life. Yet the musical legacy he left is priceless, and one that will surely endure for all time.

Real success is not on the stage, but off the stage as a human being, and how you get along with your fellow man.