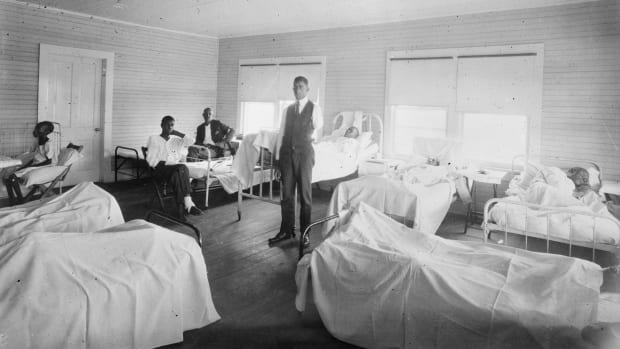 A 105-year-old survivor of the 1921 race massacre in Tulsa, Oklahoma, is the lead figure in a lawsuit that demands reparations for damage it says has continued since the destruction of the city’s Black business district. Lessie Benningfield “Mother” Randle, was a little girl when an angry white mob rampaged through the city’s Greenwood District, known as “Black Wall Street” because it was home to more than 300 black-owned businesses.

By the end of the night on June 1, 1921, the 35-city block district was burned to the ground. Contemporary reports of deaths began at 36, but historians now believe as many as 300 people died, according to the Tulsa Historical Society and Museum. The lawsuit was filed Tuesday in Tulsa County District Court by Justice for Greenwood Advocates, a team of civil and human rights lawyers. The plaintiffs include Vernon A.M.E Church — the only black-owned building to survive the massacre — descendants of other victims and the Tulsa African Ancestral Society.

Black Wall Street boasted more than 300 black-owned businesses including two theaters. Black success, Brown said, was the source of friction in the town because

it “caused some envy and anger among white people who commented, ‘How dare those negroes have a grand piano in their house, and I don’t have a piano in my house’,” she said.

Not everyone was well off — but Tulsa was fast becoming known as a place of opportunity for blacks who wanted to make a good living. What they didn’t know is that by the end of the night on June 1, 1921, their neighborhood would be decimated. Historians say the spark was an encounter between a 17-year-old white girl named Sarah Page and a 19-year-old black man named Dick Rowland. “Dick Rowland worked as a shoe shine boy in downtown Tulsa,” Brown said. There was good money to be made because of the wealthy white oilmen who had cash to throw around. It was late May.

Rowland, Brown said, had been given permission to go into the Drexel building, a white establishment, to get water and use the restroom when he was overheated. Sarah Page worked in that building as an elevator operator. The two saw each other just about everyday because Rowland would use the elevator that Page operated. On that day, the ride didn’t end as quietly as it had so many times before.”This particular day after the elevator doors closed and Sarah Page and Dick Rowland were alone in the elevator a few moments, there was a scream.The elevator doors opened. Roland ran and was later arrested. And Sarah Page initially claimed that she was assaulted, Brown said. Other historic accounts say Rowland tripped leaving the elevator, grabbed Page’s arm, she screamed and an onlooker went to authorities. Seventeen-year-old Sarah Page never pressed charges. But authorities did. And the damage was done. By the end of the day the rumor mill said Page had been raped.

Largely inaccurate press reports added to the furor. Photos show large crowds of white residents gathered at the courthouse. They had one demand: They wanted Rowland to be lynched. Brown says the Black community decided to protect him. No one believed he would have done such a thing and they came to his rescue.”They were willing to risk their lives, they knew that they would be risking their lives to help defend Dick Rowland,” Brown said.When they got to the courthouse, thousands of whites had also gathered in front of the court. They were angry and upset about what had happened. The whites were armed. One of the armed men got into a confrontation with a black resident who asked him why he was brandishing his gun. Brown says historical records show the two men argued. There was a struggle over the gun. It fired. The white resident was shot. All hell broke loose.

Whites decided to storm the black neighborhood. Some estimates put the number who stormed across the railroad tracks dividing black north Tulsa and white south Tulsa at 10,000.

“Blacks were so outnumbered and outgunned, whites eventually broke through the railroad tracks and invaded what was home to Black Wall Street, the Greenwood district,” Brown said.

By the end of the night, 35 city blocks had been burned to the ground. Black Wall Street had been erased. There are photos of the dead bodies of African American residents lying in the streets. Some had been shot to death. The historical account is that at least 300 black people were killed. “There’s really no way to knowing exactly how many people died. We know that there was several thousand unaccounted for,” Mechelle Brown of the Greenwood Cultural Center said citing survivor accounts and population tallies. Many simply fled the city.

Some of the survivors have said they remember death not just in the streets, but raining down from the sky.

“Many of our survivors have commented that they remember seeing planes dropping bombs. Dropping nitroglycerin bombs. We know that at least one company allowed white rioters to use their planes to drop bombs,” Brown said.

There’s no official account of the bombings, but lawyer Buck Colbert Franklin, the father of historian John Hope Franklin, described the air attacks in a manuscript that’s now housed at the Smithsonian’s National Museum of African-American History and Culture.Franklin saw a dozen or more planes circling midair and heard “something like hail falling upon the top of my office building,” he wrote. Down the street, he saw the Midway Hotel and then other buildings burning from their roofs downward. “The sidewalks were literally covered with burning turpentine balls. I knew all too well where they came from, and I knew all too well why every burning building first caught from the top,” he continues. “I paused and waited for an opportune time to escape.”

A state commission report in 2001 did say, “Tulsa was likely the first city in the (United States) to be bombed from the air.”

The lawsuit claims that the racial and economic disparities caused by the massacre created a public nuisance and an economic blight that remains. It says local government and agencies failed to help the neighborhood rebuild.”Greenwood and North Tulsa Community residents continue to face racially disparate treatment and City-created barriers to basic human needs, including jobs, financial security, education, housing, justice, and health,” it says. Among the defendants, the city of Tulsa, the Tulsa Regional Chamber and the Tulsa County Board of Commissioners said they would not comment on pending litigation.

The Tulsa County sheriff, Tulsa Development Authority and Tulsa Metropolitan Area Planning Commission, also named in the suit, did not respond to requests for comment.The state of Oklahoma used the public nuisance law to win a $572 million lawsuit against drugmaker Johnson & Johnson last year for its role in the state’s opioid crisis.According to the lawsuit, the mob looted and destroyed Randle’s grandmother’s home, causing her “emotional and physical distress that continues to this day.”

“She experiences flashbacks of Black bodies that were stacked up on the street as her neighborhood was burning, causing her to constantly relive the terror of May 31 and June 1, 1921,” the lawsuit said.

Randle is one of the last living survivors of the massacre, which occurred after Dick Rowland, was accused of assaulting Sarah Page in the elevator. Charges against Rowland were later dismissed, according to the Tulsa Historical Society. Attorney Damario Solomon Simmons told CNN that Randle is in poor health but was “upbeat and encouraged” when she heard about the lawsuit. The plaintiffs contend that members of the Tulsa Police Department, the Tulsa County Sheriff’s Department and the Oklahoma National Guard participated in the mob. It said the National Guard provided tactical and logistical support to the mob. The Oklahoma National Guard, in a statement, defended its actions at the time.

“The historical record shows that a handful of Guardsmen protected the Tulsa armory and the weapons inside from more than 300 rioters. The actions of these Guardsmen substantially reduced the number of deaths in the Greenwood District. In the days following the riots, Oklahoma Guardsmen restored order to the area and prevented further attacks by both black and white Tulsans.”

The lawsuit says that Greenwood residents suffered $50 million to $100 million in property damage from the massacre and says that policies implemented in the following decades led to the decline of Greenwood and North Tulsa and increased inequality.It does not ask for a specific dollar amount in reparations, but calls for victims to be compensated for their lost property and the money that should have gone to the community since 1921. The lawsuit calls for the creation of a victim compensation fund, mental health and education programs for residents of Greenwood and North Tulsa and a college fund for descendants of massacre victims. It seeks construction of a hospital in the community and asks that Black residents from the Greenwood and North Tulsa communities to have priority consideration for city contracts. “Ms. Randle has been hurting all these years by what happened in Tulsa. It’s been a huge burden on her and she believes it’s about time for the city to pay what’s owed,” Solomon-Simmons said. “Ms. Randle wants respect, restoration and repair from the City of Tulsa.”