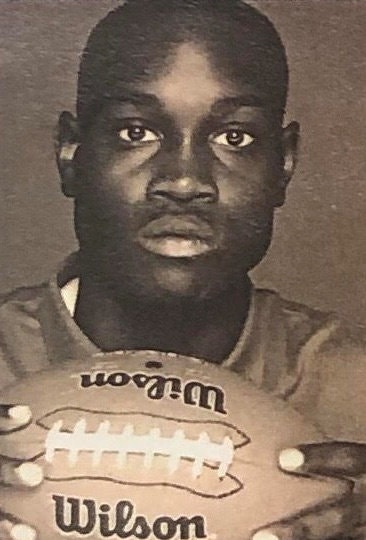 Ahmaud Marquez Arbery was a former star high school football player, his father said he often exercised in the area and liked to keep fit. He was 25 when he was shot dead by a pair of white supremacists who were father and son. His family has described him as a good, generous young man with a big heart. He would have turned 26 in May.

In the afternoon on 23 February, 2020, Mr Arbery was out for a jog in the coastal city of Brunswick. At one point, he entered the Satilla Shores neighbourhood. A neighbourhood resident, Gregory McMichael, told police he believed Mr Arbery resembled the suspect in a series of local break-ins. Police have said no reports were filed regarding these alleged break-ins.Gregory McMichael and his son, Travis, armed themselves with a pistol and a shotgun and pursued Mr Arbery in a pickup truck through the neighbourhood.

According to the elder Mr McMichael, he and his son had said “stop, stop, we want to talk to you”. He claims that Mr Arbery then attacked his son. Lawyers for Mr Arbery’s family have said the 25-year-old was unarmed. Three shots were fired and Mr Arbery fell down on the street. An autopsy report showed Mr Arbery had two gunshot wounds in his chest, and a gunshot graze wound on the inside of one of his wrists. He did not have drugs or alcohol in his system.

After Mr Arbery’s modern-day lynching, two pieces of video footage emerged of Mr Arbery in the last 60 minutes of his life. The first video surfaced publicly on 5 May, 2020. The 36-second clip was filmed from a vehicle following Mr Arbery. It shows Mr Arbery jogging, and approaching a stationary pickup truck which is ahead of him on the road.  He tries to bypass the truck which repeatedly goes into his path and then is seen struggling with a man carrying a shotgun. There is muffled shouting and three gunshots are heard. A second man is standing in the bed of the pickup. The second man is then shown with a pistol standing alongside the other armed man with the jogger no longer in view.

On 10 May another video emerged, showing a man believed to Mr Arbery at a home construction site shortly before the shooting. In the footage, which came from a surveillance camera, a black man in a white T-shirt walks onto the site and is seen looking around for a few minutes before leaving and jogging down the street.

The father and son who share a hatred of Black people

Gregory, 64, and Travis McMichael, 34, are in the custody of the Glynn County Sheriff’s Department. They were detained by the Georgia Bureau of Investigation (GBI) on 7 May. The father-son pair face murder and aggravated assault charges. Gregory McMichael was a former police detective and this will inevitably raise concerns regarding the impartiality of the criminal proceedings against him and his son. He also worked as an investigator for the local district attorney for years and had retired in 2019, which could only serve to further ingrain those concerns.

Two prosecutors have recused themselves from conducting the case against the McMichaels, citing professional connections to the elder Mr McMichael had previously been involved in an investigation of Mr Arbery, according to a letter written by Mr Barnhill, the second prosecutor to recuse himself from the case.

A neighbour who filmed a video of the confrontation, William Bryan, was arrested on 21 May and charged with criminal attempt to commit false imprisonment. Police arrested William Bryan, who filmed the first video, two weeks after the McMichaels. Mr Bryan, along with the two McMichael’s, appeared to have been following Mr Arbery “in hot pursuit”, according to a memo by Mr Barnhill.

He is also mentioned in the Glynn County police report of the shooting, in which officers noted that Mr Bryan had unsuccessfully tried to block Mr Arbery’s path. However, Mr Bryan told a local TV station that he “had nothing to do with it” and was in “complete shock”.

He did not answer questions on why he was there or why he started recording, but his lawyer said: “My client was responding to what he saw, which was someone in the community he didn’t know being followed by a vehicle he recognised.”

Mr Bryan has submitted a voluntary lie-detector test to investigators, his lawyer has said, despite not being asked by law enforcement to do so.

The delay. Ahmaud was murdered on 23 February 2020, yet the McMichaels were not arrested until May.

Officials have also publicly disagreed over whether there were orders to not arrest the pair. This adds yet another nail in the coffin of confidence in the system to prosecute this case fairly and bring about any semblance of justice. Brunswick District Attorney Jackie Johnson – whose office initially handled the case – has been accused by two county commissioners of not allowing police to arrest the McMichaels immediately after the shooting.

The second district attorney involved, Waycross Circuit District Attorney George Barnhill, had told police he believed the father and son had used citizen’s arrest rights in confronting the jogger, and that as a result there were no grounds for arrest. Mr Barnhill later recused himself, citing concerns raised by the victim’s mother over his ties to Mr McMichael.

Under the citizen’s arrest law cited by Mr Barnhill, an individual can detain someone they have seen committing a serious crime and if the suspect is trying to escape. From what has so far been reported, there is no suggestion that Ahmaud was sitting committing any crime, let alone a serious one.

The delay in prosecuting the case is said to be in part tied to prosecutor turnover: the case is currently on its fourth. The Georgia Attorney General announced on Monday that Joyette Holmes of the Cobb County Judicial Circuit would replace attorney Tom Durden as lead prosecutor.

On 11 May Georgia appointed a new lead prosecutor in the case – district attorney Joyette Holmes – the fourth since Mr Arbery was killed. Her predecessor had called for a grand jury, but it could not be convened until Covid-19 restrictions began easing in June.

Mr Arbery’s family have criticised prosecutors’ handling of the case as a “cover-up”.

Atlanta Attorney General Chris Carr has now formally requested the GBI to look into the conduct of the district attorneys who first handled the case before charges were filed.

At a preliminary trial hearing which started on 4 June, a judge determined that there was enough evidence to try all three men for murder. The three men have denied the charges.

At the same hearing on 5 June, 2020, the court heard that William Bryan told investigators he heard Travis McMichael use a racial epithet after fatally shooting Ahmaud Arbery in Glynn County, a Georgia Bureau of Investigation agent testified.

On cross-examination, Dial testified Bryan mentioned the slur in a May 13 GBI interview, and to Dial’s knowledge, Bryan had not previously made the allegation, including during a May 11 interview. Thursday’s hearing lasted about seven hours, with the judge ruling all three defendants — Bryan, McMichael and McMichael’s father, Gregory McMichael — will stand trial on all charges.

During Thursday’s testimony, Dial said there were “numerous times” on social media and via messaging services that Travis McMichael used racial slurs, once messaging someone that he loved his job because there “weren’t any N-words anywhere.

“In another instance sometime before the shooting, he replied in an Instagram message that things would be better if someone had “blown that N-word’s head off,” Dial testified. Dial did not say to whom McMichael was referring and was not asked for more context.

Bryan, too, had several messages on his phone that included “racial” terms and indicated he may have prejudged Arbery when he saw him that day, Dial said. “There’s evidence of Mr. Bryan’s racist attitude in his communications, and from that I extrapolate the reason why he made assumptions he did that day,” he said.

“He saw a man running down the road with a truck following him, and I believe he made certain assumptions that were, at least in part, based upon his racial bias.”

Ahmaud’s parents said the arrest of the McMichaels was a relief, but they have expressed a distrust of local law enforcement.

“I honestly think that if we didn’t get national attention to it, my son’s death would have actually been a cover-up.”

Benjamin Crump, a lawyer for the family, has asked for the same justice for Mr Arbery if the situations were reversed and two black men had attacked an unarmed white man.”We know beyond a shadow of a doubt they would’ve been arrested on day one,” Mr Crump said.