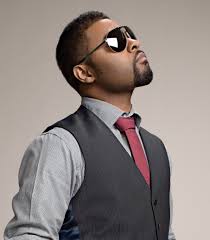 It’s a bittersweet thing, you know, I recognized that I’m blessed to have the timeline that I do have professionally; however, my personal life is riddled with a lot of crap that I need to kind of unpack and do better with so I that I don’t proceed in the future the same way but with more crap. It’s bittersweet but overall it’s a blessing and I’m grateful.

Musiq Soulchild is a hip-hop soul artist that was born Taalib Johnson on September 16, 1977, in Philadelphia, Pennsylvania. He built a reputation for being musically gifted, beat boxing for MC’s, free styling on the open mic circuit or just performing acappella for strangers on the streets.

Deeply inspired by the R&B/Soul sound of the 70’s he uses the name “Soulchild” as a way to show respect and admiration to his biggest musical influences such as Stevie Wonder, Donny Hathaway, Marvin Gaye and many others. In April 2016 he released his 7th studio album entitled “Life On Earth” leading with the new hit single “I Do”. The album peaked at #2 on Billboard R&B album charts and # 3 on the Top Hip-Hop R&B album charts. He has received awards from Billboard, BET, ASCAP, BMI, and Soul Train. He has also earned award nominations from MTV, the American Music Awards, the NAACP, and 12 Grammy nominations.

In the late 90s, a young man named Taalib Johnson was known for singing on the corners downtown in his hometown of Philadelphia. But on November 14th of 2000, he would introduce himself to the world as Musiq Soulchild with the release of his debut album Aijuswanaseing. Two decades later Aijuswanaseing is still loved and cherished as a classic R&B album with timeless hits such as “Just Friends (Sunny)”, “Girl Next Door”, and “Love”, which could be argued as the best love song of the 2000s.

I didn’t understand what was happening at the time, so everything was so overwhelming and shocking like “Why do y’all care so much? Y’all don’t even know me.” I wasn’t connected to the concept of being a celebrity and all of that. There were people that I looked up to that I thought were fresh, but I never imagined that I would be one of those people. It wasn’t something that I was pursuing, AT ALL! So when it happened I didn’t know how to be one, I didn’t know what to say, how to dress, how to behave, there was no developmental process to help me assimilate into that

With all the praise he has received since the release of Aijuswanaseing, Musiq Soulchild looks at his career as a bittersweet blessing because for a majority of it, the public continued to categorize him as a neo-soul singer, instead of the style that he came in the door with 20 years ago.

One of the main frustrating factors about working with a major label because they have a machine-like mentality about putting out and producing stuff, and inspiration doesn’t operate like that. It just comes as it does you can’t put it on a clock, it doesn’t work like that.

He was like if Bobby Brown was influenced by A Tribe Called Quest and De La Soul instead of Big Daddy Kane or LL Cool J. However, because there wasn’t a label for Musiq to thrive as a hip-hop soul singer, he was put into the box known as “neo-soul” which allowed him to obtain success beyond his wildest dreams but at the same time stunted his growth as an artist. Due to him being typecast early in his career, the public wasn’t open to any variation in his artistry. The fruit called success started to taste more bitter than sweet to Musiq as time grew — hence the alternate personas The Hussle and Purple Wondaluv. However, with the help of classic soul songs and hip hop beats from legendary hip hop producer J Dilla, Musiq Soulchild has returned with his latest project The Soul Brotha Series Vol. 1: dewitt4dilla and reminds us of the singer he was twenty years ago.

This past February 21st Musiq Soulchild released dewitt4dilla, a five-track EP that consists of Musiq Soulchild singing classic hits from soul singers that he grew up listening to such as Donny Hathaway, Marvin Gaye, Prince, Stevie Wonder, and Michael Jackson over beats from his dear friend and well-respected hip hop producer, the late J Dilla. I try to attend various open mics around the city and I love seeing singers like Beano French, Jacqueline Constance, Re-Mus, and others do their own dope covers of songs they love to sing, so dewitt4dilla is right up my alley. Musiq does a damn good job of singing oldies over soul-hitting hip-hop beats like Donny Hathaway’s “Love Love” over Common’s “So Far to Go.” Not only does he honor his late friend J Dilla and soul singers that he grew up listening to, but he also gets to remind himself and the rest of the world that he’s still the child who was bathed in soul music.

I’m always giving the best that I have, even when I’m not at my best, and unfortunately it may not be that good to you and that’s just is what that is. You just move on to the next moment,

With music coming from his new group Lumi Trice and an unexpected collaboration project with hip hop producer Drumma Boy, 2020 was the year Musiq Soulchild was supposed to reintroduce himself as the hip-hop soul singer that he’s always been. However, COVID-19 had other plans and prevented him from coming back home to Philly and rocking out at this year’s Roots Picnic.