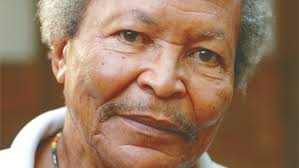 “Lovelace is unusual among celebrated Caribbean writers in that he has always lived in Trinidad. Most writers leave to find support for their literary endeavours elsewhere and this, arguably, shapes the literature, especially after long periods of exile. But Lovelace’s fiction is deeply embedded in Trinidadian society and is written from the perspective of one whose ties to his homeland have never been broken.

Novelist, playwright and short-story writer Earl Lovelace was born in Toco, Trinidad on July 13, 1935 and grew up in Tobago. He worked for the Trinidad Guardian, then for the Department of Forestry and later as an agricultural assistant for the Department of Agriculture, gaining an intimate knowledge of rural Trinidad that has informed much of his fiction.

He studied in the United States at Howard University, Washington (1966-7) and received his MA in English from Johns Hopkins University in 1974. In 1980 he was awarded a Guggenheim Fellowship and spent that year at the University of Iowa. After teaching at a number of other American universities, Lovelace returned to Trinidad in 1982, where he now lives and writes, teaching at the University of the West Indies. A collection of his plays, Jestina’s Calypso and Other Plays, was published in 1984.

His first novel, While Gods Are Falling, was published in 1965 and won the British Petroleum Independence Literary Award. It was followed by The Schoolmaster (1968), about the impact of the arrival of a new teacher in a remote community. His third novel, The Dragon Can’t Dance (1979), regarded by many critics as his best work, describes the rejuvenating effects of carnival on the inhabitants of a slum on the outskirts of Port of Spain. In The Wine of Astonishment (1982) he examines popular religion through the story of a member of the Baptist Church in a rural village. His novel, Salt, was published in 1996 and won the Commonwealth Writers Prize (Overall Winner, Best Book) in 1997. Set in Trinidad, the book explores the legacy of colonialism and slavery and the problems still faced by the country through the story of Alford George, a teacher turned politician.

His novel Is Just a Movie (2012) was the winner of the 2012 OCM Bocas Prize for Caribbean Literature.