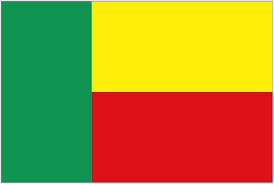 Formerly, at her call, our ancestors
Knew how to engage in mighty battles
With strength, courage, ardour, and full of joy, but at the price of blood.
Builders of the present, you too, join forces
Each day for the task stronger in unity.
Build without ceasing for posterity.

When all around there blows a wind of anger and hate:
Citizen of Bénin, be proud, and in a calm spirit
Trusting in the future, behold your flag!
In the green you read hope of spring;
The red signifies the courage of your ancestors;
The yellow foretells the richest treasures.

Beloved Bènin, your sunny mountains, palm trees, and green pastures
Show everywhere your brightness;
Your soil offers everyone the richest fruits.
Bénin, from henceforth your sons are united
With one brotherly spirit sharing the hope of seeing you
Enjoy abundance and happiness for ever.

CARIBBEAN HISTORIES REVEALED: 20TH CENTURY TRANSITIONS (NATIONAL ARCHIVES, UK)
At the time that this picture was taken, Antigua was under British Colonial rule. Its very existence proves that the British were content to let their subjects live in abject squalor, document it and send it back for filing.
Previous post BAHAMAS NATIONAL ANTHEM
Next post BOTSWANA NATIONAL ANTHEM