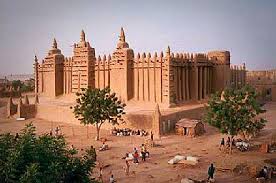 The Songhai Empire was based in West Africa, south of the Sahara Desert and along the Niger River and Senegal River. At its peak, it stretched well over 1,000 miles covering land in nations that we know today as Niger, Senegal, Gambia, Nigeria, Mali, Guinea and Mauritania, all the way to the Atlantic Ocean. The capital city of the Songhai was the city of Gao which was located in modern-day Mali on the banks of the Niger River and its cultural capital was Timbuktu.

Sunni Ali was a prince of the Songhai. He was being held prisoner by the leader of the Mali Empire who ruled over the Songhai, in the 15th Century. However, in 1464, Sunni Ali escaped to the city of Gao and took control of the city. From the city of Gao, he established the Songhai Empire and began to conquer nearby regions including the important trading cities of Timbuktu and Djenne.

The Songhai Empire was divided into five provinces each led by a governor. The emperor had total power, but he also had ministers who ran different aspects of the empire for him. They also counseled the emperor on important issues. The Songhai culture was comprised of a blend of traditional West African beliefs and the religion of Islam.

The main business was trade of all description but the strength of its economy was gold and salt. Tradespeople in Songhai also sold leather goods of all description, some of which can be seen in the British Museum in London, England.

Books and reading were highly respected and the people of Songhai had a healthy respect for books. All these centuries later, thousands of manuscripts from the time are still in existence as family heirlooms.

“Astronomy, botany, pharmacology, geometry, geography, chemistry, biology,” said Ali Imam Ben Essayouti, the descendant of a family of imams that keeps a vast library in one of the city’s mosques. “There is Islamic law, family law, women’s rights, human rights, laws regarding livestock, children’s rights. All subjects under the sun, they are represented here.”

Timbuktu was home to the University of Sankore, which at its height had 25,000 scholars. An army of scribes, gifted in calligraphy, earned their living copying the manuscripts brought by travelers. Prominent families added those copies to their own libraries. As a result, Timbuktu became a repository of an extensive and eclectic collection of manuscripts.

The slave trade was an important part of the Songhai Empire. Enslaved people were used to help transport goods across the Sahara Desert to Morocco and the Middle East, and were also sold to Europeans to work in Europe and the Americas. They were usually captives of war captured during raids on nearby regions and were treated as sources of free labour but also recognised as human beings. If an enslaved captive converted to Islam, they were not sold. They were not treated in the same way as those Africans who had the great misfortune to be purchased by Europeans and those that sold them had no idea of the living hell that awaited them in the Americas and in Europe. The Songhai and other African slave traders could not conceptualise treating any other human being like livestock as they did not treat those that they had captured in that way.

The Songhai Empire lasted from 1464 to 1591. Prior to the 1400s, the Songhai were under the rule of the Mali Empire. In 1493, Askia Muhammad became the leader of the Songhai and under his rule, Islam became an important part of the empire. He conquered much of the surrounding lands and took control of the gold and salt trade from the Mali Empire. In the mid-1500’s the Songhai Empire began to weaken due to internecine conflict and civil war. In 1591, the Moroccan army invaded and captured the cities of Timbuktu and Gao. The Empire collapsed and was divided up into a number of separate smaller states.

-1000-1100s: Timbuktu Is Established as a major trading post near Niger River

-1200s: Timbuktu Becomes an integral part of the Trans-Saharan Gold and Salt Trade

-1300s: Mansa Musa Brings the Islamic Faith to Timbuktu and expands the Mali Empire; the University Of Sankore reaches its height

-1500s: Timbuktu reaches its zenith as a centre of excellence and knowledge for African and Islamic scholars

-late 1500s: Moroccan invaders take control of the political capital, Timbuktu and the great Songhai Empire comes to an end