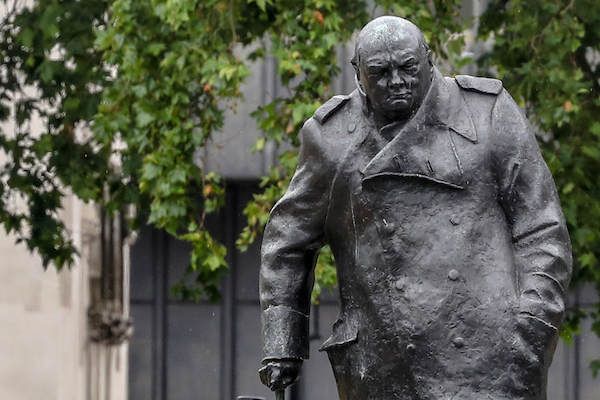 Is presented in the UK as being a national hero, a legend and an icon. The man who saved the UK from German rule and single-handedly ensured victory in the Second World War, despite not leaving the country, firing a single bullet or donning a uniform. We, as UK schoolchildren and citizens, are taught to (and expected to), venerate his memory.

His racist beliefs backed by the power bestowed on him by reason of his position as British Prime Minister and in various Cabinet Minister roles before that, have been excused by saying that he was ‘a man of his time’. That still makes him a White Supremacist man of his time as well as a racist held up as a shining example in the current time.

The history we learn at school about him does not include the following.

In 1937, he told the Palestine Royal Commission:

“I do not admit that the dog in the manger has the final right to the manger even though he may have lain there for a very long time. I do not admit for instance, that a great wrong has been done to the Red Indians of America or the black people of Australia. I do not admit that a wrong has been done to these people by the fact that a stronger race, a higher-grade race, a more worldly-wise race to put it that way, has come in and taken their place.” [Debunking the Myths of Colonization: The Arabs and Europe by Samar Attar, page 9]

In 1943, he refused to allow 170,000 tons of stockpiled Australian wheat to be released to the starving people of Bengal, in northern India which was experiencing a severe famine. In part, the famine had been contributed to by the British burning rice and boats to prevent the Japanese advancing into India from Burma, which they had occupied the preceding year. The occupation resulted in imports of up to 2 million tons of rice from Burma to India being cut off, causing the famine. Despite the death of 3 million Bengalis, Churchill insisted that India continue to provide rice to Britain for the war effort.

Churchill had received a number of warnings from his aides in the War Cabinet that if India had to contribute to grow and provide rice for the war effort, it would not have sufficient food for its own people. He still refused to release any food to the Bengalis. During this time he also turned down an offer of wheat and rice from the USA and ignored an offer of wheat from Canada to alleviate the effects of the famine on the Indian people. [Churchill’s Dark Side: Six Questions for Madhusree Mukerjee by Scott Horton, Harper’s Magazine, November 4, 2010].

He advised against intervention when Italy attacked Abyssinia, on the grounds that Abyssinia was not a “fit, worthy and equal member” of the League of Nations.