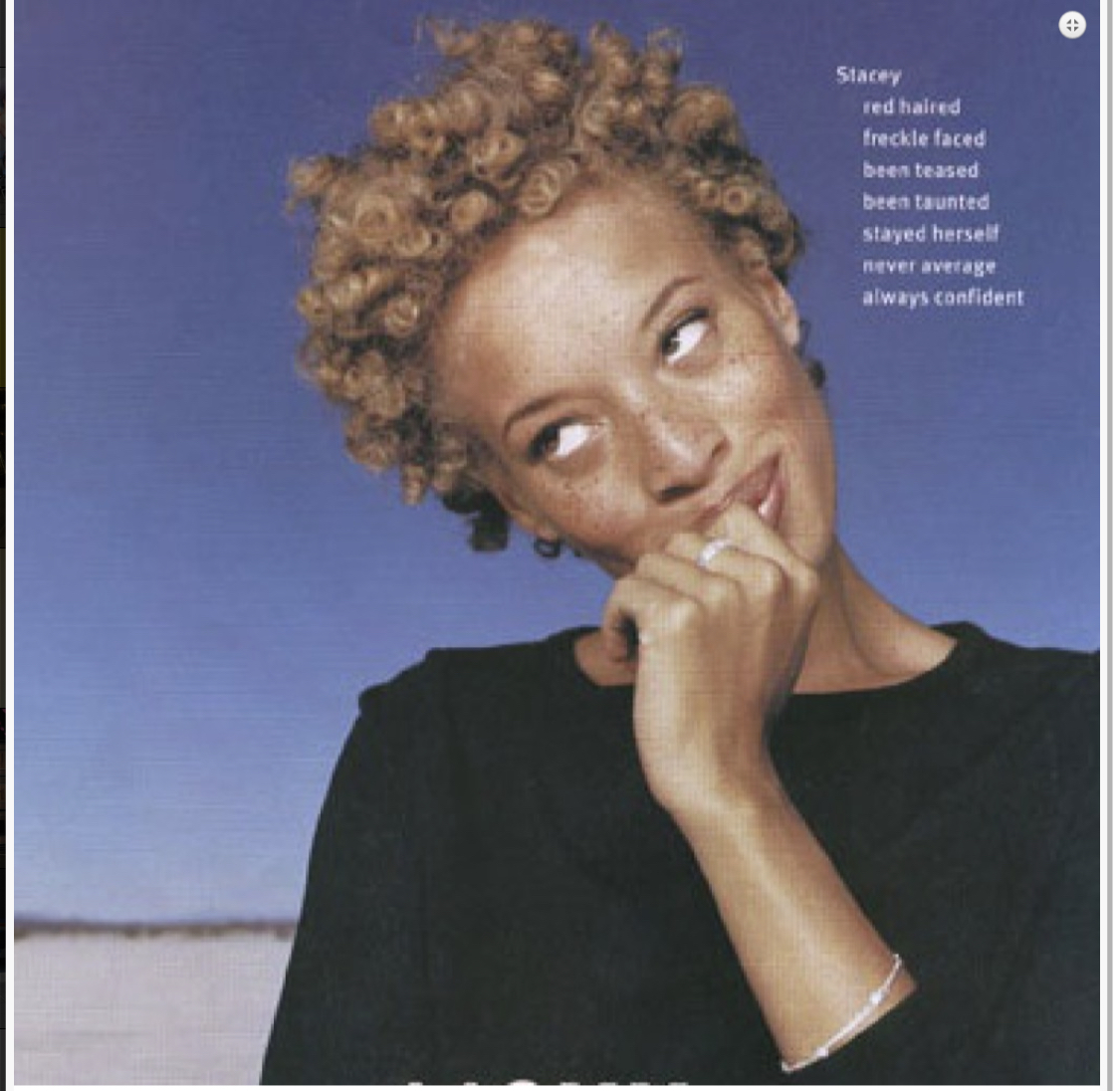 Stacey McKenzie was born on March 27, 1977 in Kingston, Jamaica. She’s a supermodel with a distinct reputation for telling it like it is.

“This is the thing with me: If you have the talent, why limit yourself? I started with modeling, and from there it was easy for me to get into the entertainment industry in terms of acting, television and film. I used my modeling as a platform to get into that type of industry, and then I wanted to create my workshops. I met quite a few models along the way and they didn’t know about getting into the business. I was self-taught. I actually studied and researched how the industry works.”

With her bright red Afro and freckles, Stacey McKenzie was unlike anyone else on the ’90s fashion scene. Her strong runway walk made her stand out further and she worked with the decade’s top talents, including Jean Paul Gaultier, Thierry Mugler, and Richard Avedon, who shot her for Calvin Klein’s memorable CK Be campaign.

From there, she began modeling around the world following her success in Paris. She worked in London, Italy, Austria, the United States, and Japan for designers including Alexander McQueen, Betsey Johnson, Tommy Hilfiger, Todd Oldham, and Michiko Koshino. She’s appeared on the cover of many magazines including Harper’s Bazaar, Interview, Essence, Le Monde, and Vibe. She’s also appeared in editorials for Vogue many times, including the U.S., Japan, Korea, Spain, and Britain editions.

Stacey’s unique look landed her a role in Luc Besson’s sci-fi romp The Fifth Element as an airline attendant. In addition to modeling, Ms. McKenzie hosted Stylissimo on MTV Europe. The show was broadcast all over Europe, Africa and Asia.

Stacey pursued a vision to teach all aspect of modeling and most importantly teaching young people to be confident within themselves. Her pursuit of this vision led to the development of Walk This Way Workshops.

“I started my company to help others, because from what I experienced in talking with aspiring models, nobody wanted to help them. This is such a competitive industry [that] other models, established in the business, would just keep the information for themselves. But for me, the Most High put me in this industry for a reason, and it’s not for me to keep for self. If I see anybody in need of help, then I can give them the information as well.”

Stacey is actively involved in giving back to the community, encouraging youth to “Own You” and “Rule Your Runway” with confidence. She is so passionate about her Walk This Way Workshops she’s started a tour, focusing on channeling your inner supermodel to promote life-skill building in young girls and boys, men and women aged 12 plus in inner city communities.

“Motivational speaking came later. I’ve always wanted to do it, but I thought you had to be chosen. I was very nervous to be in front of a crowd speaking because I talk so much. But I found out about Toastmasters and I was able to get over my fear of public speaking. From there I was propelled and felt motivated to go into motivational speaking. A lightbulb went off, and I was like, maybe I should share with people my obstacles, my challenges and how I was able to overcome them.

I truly believe I was put in this industry for a reason, because I was told no by every single agent in America and in Canada. Folks were like, ‘This is not for you.’ I was called everything from ugly to weird and different to I would never sell products. I would never be a moneymaking model. I was way too different-looking. It took me five years to get signed! It was a huge blessing. If I had listened to those people, I wouldn’t be on the phone with you right now. Who knows where I would be? I might have been a lawyer or something, who knows. I would probably be a private investigator, because I’m really nosy (laughs).

There are two sides to my company. There is a modeling side, where I teach all aspects of modeling and not just for high fashion. There is also commercial modeling, lifestyle modeling, and that can be from babies up to 100 years old or older, as long as you look the part. I teach them how to get into the business and what to do when they get in.

And then I have my camp, which is the second part. It is dedicated to the youth who don’t have the opportunity to meet with people like myself or other people in the industry. They can learn about fashion, art, entertainment and business, finance, how to get grants for postsecondary education or for starting their first business. The students get to learn from all different kinds of people so each will have a different mentor within each of those fields.

I strategically choose the mentors that have been through obstacles and challenges, like serious challenges, and pursued their dreams and goals and made it. I created the camp because I was one of those youths. I came from the ’hood. I grew up in the ’hood from Jamaica to when I moved to Canada. I said to myself, if I get blessed with making it, there is no way I’m not going to share information with somebody. That’s crazy to me. You shouldn’t be selfish with it.

Be the best you. Always strive to be the best you. Everybody’s not going to like or love you. There will be people who love or hate you. We all have a lot of issues, but you always have to look into yourself and look at things you’re not doing right and fix it to be a better you.