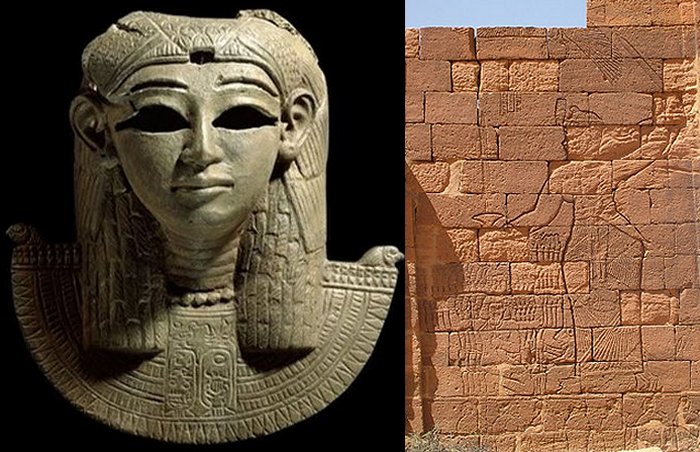 The ancient kingdom of Kush, was located just to the south of Egypt in what is now The Sudan and is referenced as a part of the region known as Aethiopia (the place of burnt faces). Kush was a land of kings and queens who had mastered their terrain and knew how to use it to their strategic advantage. A land whose royal family members, much like in Egypt, were buried in pyramids. Hot and dry, strategically watered by the Nile, this is the land of the Kandakes. (Kandake = great woman or queen).

Kandake, in the Meroitic tongue, referred to the sister of the king of Kush, who – due to matrilineal succession – would bear the next heir to the throne, making her queen mother. The word is Latinized as Candace. The Kandake was a prominent and important member of the society, having her own courts and lands and the role of regent. But, every now and then, one would rise to become not only Kandake, but Qore (king) as well, meaning, ruling queen. A fully independent ruler whose husband was her consort; and in Kush, this was not an uncommon happening.

According to research, the Kandakes were portrayed in their art as having strong, even muscular statures and towered over their enemies, in contrast with their female Egyptian neighbors to the north who preferred to be portrayed as slim and slender. The Kandakes and their kings had scars on their faces which they wore with pride as symbols of beauty.

The Kandakes on record who ruled, and their approximate periods of rule:

I’m sure all their stories and journeys are equally fascinating, but the one that caught our attention is that of Amanirenas, the one-eyed Kandake. Her husband had died in a battle and she and her son, faced off against the Romans in many a skirmish. During her reign, Rome overcame Cleopatra and Mark Anthony in Egypt and Emperor Augustus had set his sights further south. Kush was next. The great queen bided her time and struck a mighty blow when the Romans were distracted with another campaign elsewhere. Then she and her armies invaded ‘Roman Egypt’ and captured two cities, expanding their kingdom northward. They defaced several statues of the Roman Emperor, chopping off his head. One head, she took and planted beneath one of their temples. Taking great delight that her people would be trampling on the head of this Roman Emperor daily.

The Romans – as you can imagine – were not pleased with her victory, their Emperor demanding a response. And so Rome retaliated relatively quickly, recaptured the cities that Amanirenas had taken and pushed their way into the kingdom of Kush as far as Napata. Taking thousands of her people captive and selling them off as slaves. Amanirenas was not going to yield to the Romans.

She retaliated swiftly, over and over, reportedly putting terror into the hearts of the enemies of her kingdom. It is said that she fed her captives to her lions and set war elephants against them. The war between Rome and Kush was to last for five years. Eventually, the Romans capitulated and negotiated with the great queen. The terms had Rome leave Kush and the kingdom NOT paying tribute to the Emperor while enjoying increased trade between Rome and Kush. Various historical accounts question some of the abilities and victories of the great queen, saying the climate was not favorable to the Roman soldiers … but the outcome of the peace deal speaks volumes.

The story of Kandake Amanirenas shows the strength of an Afrikan woman who led a Kingdom that conquered the Roman empire, which other kingdoms bowed to…a true Afrikan indeed.

But let me tell you what this means. The entire story of Kandake Amanirenas is just a shadow compared to that of the coming King, Who, as a stone rejected by men in the days of His flesh, will cut out a stone without hands, set it up on the earth as a mountain and will bring to an end the kingdoms of this world. I speak of Christ, the King. For of the increase of His government and peace there will be no end, for upon the throne of David His father shall He sit and over His kingdom, shall He reign, to order it and establish it with judgment and justice, from this time forward, even forever. Be ready! For you, as an Afrikan, came from a long lineage of kings, queens, warriors, emperors, army generals, wealthy tillers of the earth and its resources; those who the kings of other nations outside Afrika bowed to in honor and fear. And because the Afrikan blood is rich and bold, it means you are also a king, queen, emperor, empress, wealthy and not some aid-begging, roadside thug and compromising individual. The story of Kandake, or Queen Amanirenas, of Kush is one that gives a clear clue of what the true Afrikan woman is and can become if she gives herself a chance to remove the veil of lies that portrays women as weak or less. However, this story is not featured as part of our story so that Afrikan women can learn how to be warriors or military fighters. Not at all. It is intended however, for the Afrikan woman to know that like her foremothers, she is strong. She carries the ability to do great things in and for Afrika. As an Afrikan reading this, your mother, sister or wife has been made to look weak, unreliable, primitive, dull, unintelligent by those who think your forefathers lived on trees. But that was a lie and will never be true.